The members of the progressive Democratic congressional
coalition known as “The Squad”—Reps. Alexandria
Ocasio-Cortez, Ayanna Pressley, Ilhan Omar, and Rashida Tlaib—are
set to join today in Washington D.C. with other legislators and
housing advocates to propose a sweeping series of housing policy
bills.

Hinted at by the legislators last fall, the collection of seven
different proposals, known as The People’s Housing Platform, is
designed to tackle different aspects of the nationwide housing
affordability crisis, including tenant rights, homelessness, the
deterioration of the nation’s public housing stock, and the role
speculation plays in rising housing costs.

The proposals come as
housing is becoming an increasingly bigger issue in the 2020
election, with most of the Democratic field
releasing detailed housing plans. Dianne Enriquez, co-director
of community dignity campaigns for the Center for Popular
Democracy, one of the groups endorsing the People’s Housing
Platform, said that its proposals draw on “tenant organizing
across the country,” reflecting a goal for grassroots organizers
to provide more legal support to renters, as well as invest federal
money in expanding housing assistance. 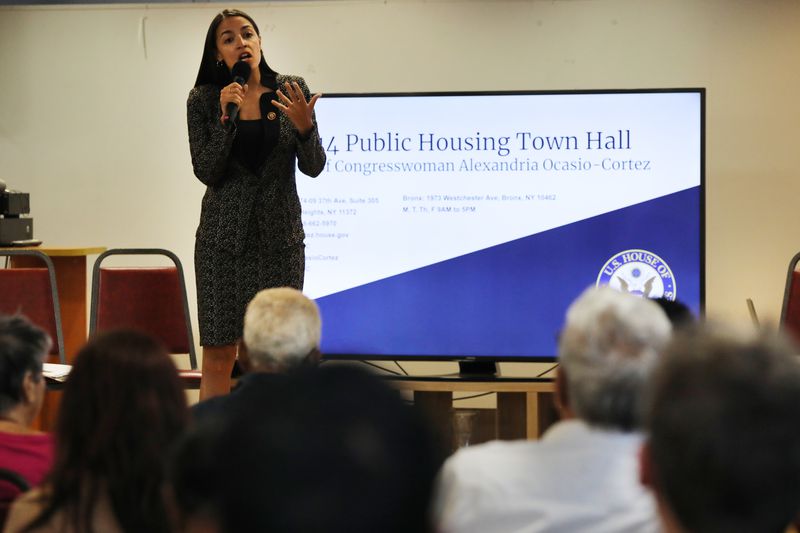 The package has been in the works since last spring, with
legislators and advocates from the Center for Popular Democracy and
People’s Action, backed by a national coalition of housing
activists including the National Low-Income Housing Coalition,
collaborating on a comprehensive package of laws that approach the
housing issue from multiple angles.

“Housing policy for the most part isn’t discussed in the
halls of Congress or among the general public, and what is
discussed is pretty incrementalist or reformist in nature and not
really systemic,” Tara Raghuveer, housing campaign director for
People’s Action, tells Curbed. “We see the first order of
business is showing that we can treat housing as a public good, as
opposed to a commodity. In order to do that effectively, we in the
field, as well as the legislators, felt the need to go deep on a
set of distinct priorities, instead of throwing them into one big
omnibus bill, where pieces get lost.”

The seven planks of the platform include:

The collection of bills doesn’t have a total price tag, nor
any analysis suggesting how many people it would impact in total.
It arguably could rival, or exceed,
Bernie Sanders’s $2.5 trillion housing plan in terms of
cost.

San Francisco-based housing advocate Randy Shaw says that
it’s great to see a broad group of legislators and advocacy
groups make this an issue at the federal level, but it’ll also
take extensive work on the state and local level to pass
significant housing reform.

“The question is whether housing will be a priority,” he
says. “Everyone is for housing reform, but they’re also for
healthcare and education. These are multi-issue groups and
lawmakers. It’s great to have these policies out there, but
it’ll take mobilizing constituencies to make it a real priority
in 2021. If this is the big priority, let’s see it, we need
it.”

According a public poll commissioned commissioned by the
National Low-Income Housing Coalition (NLIHC) last fall, 85 percent
of Americans believe that ensuring everyone has a safe, decent,
affordable place to live should be a “top national priority,”
and 8 in 10 people in America believe that Congress should “take
major action” to make housing more affordable for low-income
people.

Diane Yentel, president and CEO of the NLIHC, says proposals
like the People’s Housing Platform show that “political will is
growing” for investing in “proven solutions at the scale
necessary.”

“Leaders in Congress—like those introducing today’s
bills—recognize the need and are responding by introducing bold,
ambitious, and much-needed housing bills, the likes of which we
haven’t seen in generations,” says Diane Yentel, president and
CEO of the NLIHC.

While there’s little chance the package of bills would pass
the Senate this term, its proponents believe it’s important to
put down markers for where progressive housing policy should go.
Raghuveer believes it could take years of collective action and
pressuring lawmakers to make this not just Democratic party policy,
but something that can be passed into law.

“The reality is, this is also a way for us to demonstrate that
there are leaders and champions within Congress ready to take
action now, and it’s a call to action now to the rest of our
legislators to stand up and be brave and put the needs of their
constituents above corporations,” Enriquez tells Curbed. “These
are key progressive lawmakers taking a stand. If [these laws]
don’t pass soon, that doesn’t mean we won’t be building
political power on a state and local level to eventually pass these
laws.”

Source: FS – All – Architecture 10
A closer look at AOC and the Squad’s housing platform

Dow and Sport Singapore partner to divert 300,000 pairs of shoes away from landfill into building new sports infrastructure