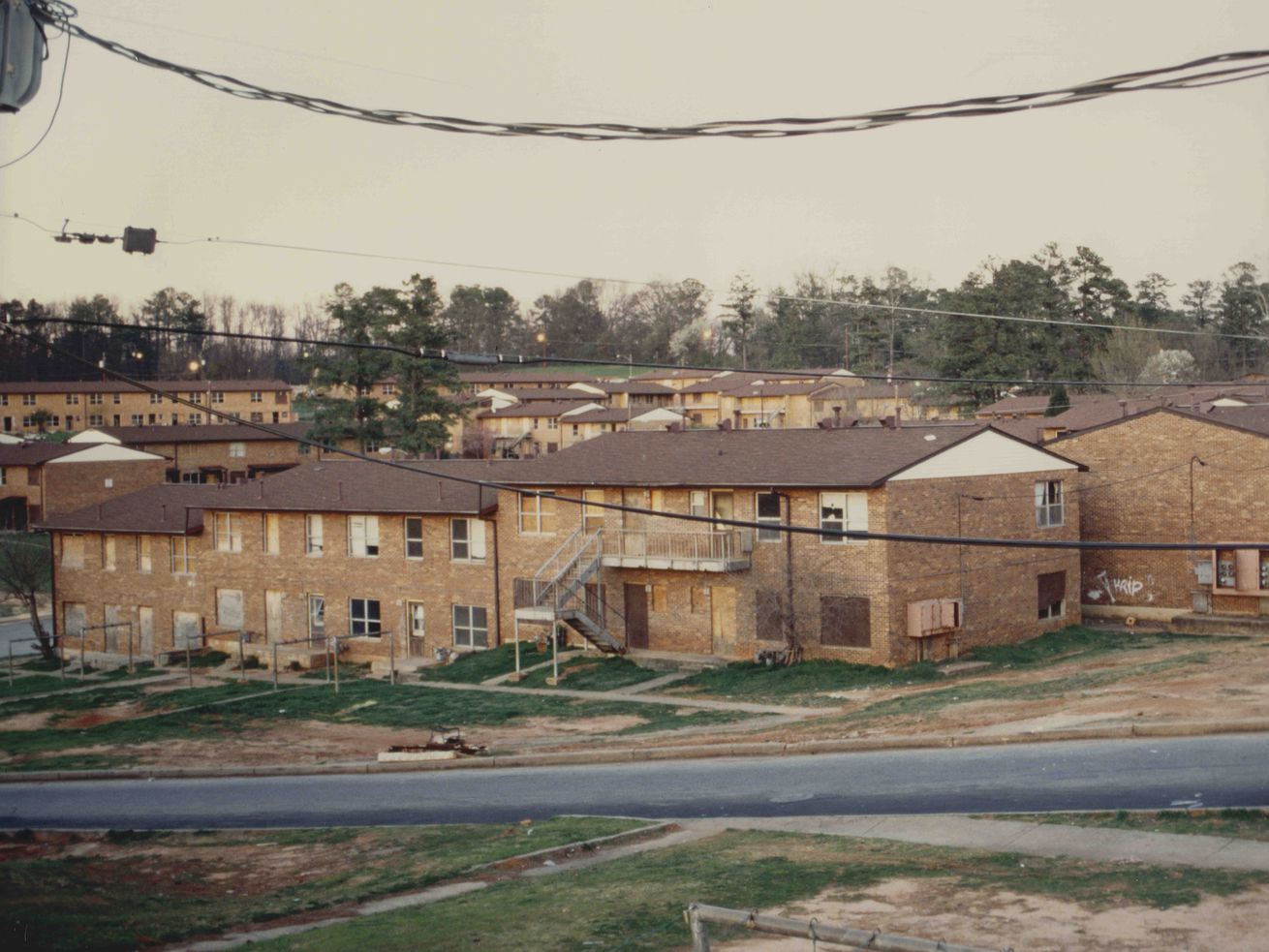 “My impression was they were going to be fine, because they
were brand new—no reputation, they were not even filled up,”
Lawrence Lightfoot tells the camera about the East Lake Meadows
housing project in Atlanta. He and his family moved to the project
in 1971 after a fire destroyed their house in another part of the
city.

“I found out after a couple years,” Lightfoot went on,
“that they were not okay.” Within months of moving in,
residents found that their water heaters were breaking, rainfall
was eroding the land around their homes, and they had to fight the
government for basic necessities like day care and healthy food.
Less than a year after the project opened, it had already earned
the moniker “Little Vietnam.”

Advocates and policymakers still disagree about how conditions
in public housing projects like East Lake Meadows became so bad,
but nobody disagrees about how bad they were. The phrase “public
housing” itself carries an extreme negative stigma inherited from
conservative politicians like Bob Dole, who famously said the
program made the government “the landlords of misery.”

As a result, the federal government and most major cities have
all but abandoned the practice of maintaining large, government-run
apartment buildings in favor of subsidizing private apartments. The
developments that dominated many cityscapes in the 1970s and 1980s
have now practically vanished, surviving only in archival footage
and in the memories of their former residents.

East Lake Meadows, a new documentary that premieres on PBS on
March 24, tells the story of one such development. Executive
produced by Ken Burns and directed by his daughter Sarah Burns and
David McMahon, the film gives viewers a level-headed and
compassionate look at the east Atlanta low-rise housing
project.

In addition to uncovering previously untold stories of life in
the development, the film highlights how our attitudes about public
housing have changed since the projects came down. Previous
documentaries about public housing portrayed high-density social
housing as a problem in and of itself; in recent years, though, a
new suite of documentaries have attempted to rehabilitate the idea
of social housing for the poor, focusing on the policy decisions
that helped to make the projects unlivable, and shedding light on
what was lost when the government tore them down. Burns and
McMahon’s documentary arrives at a moment when social housing
proposals are beginning to reenter the political discourse, and its
balanced portrait of life in East Lake Meadows may help eat away at
the enduring stigma around public housing and the people who lived
in it. 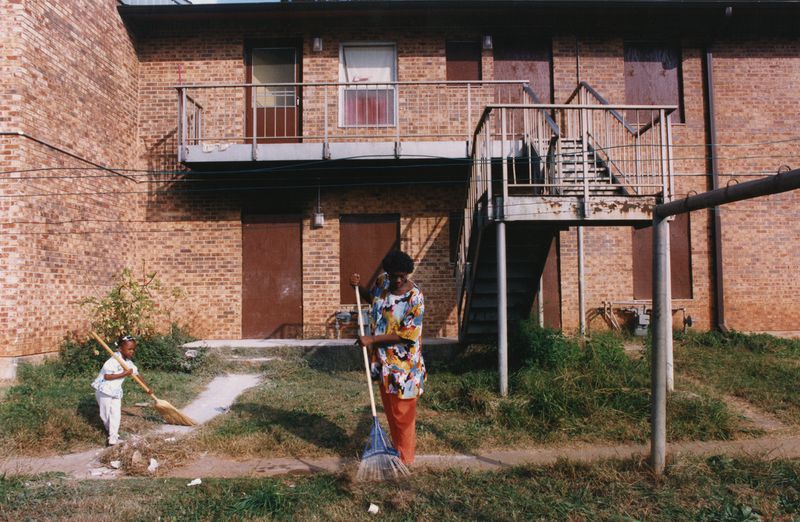 East Lake Meadows begins by tracing the genesis of public
housing as a segregated springboard for low-income white families,
who were expected to live in the “scientifically planned and
built” communities for a few years before buying a home in the
suburbs. But as single-family homeownership became easier for white
people and nearly impossible for black people, white communities
fled for the suburbs, which meant many of the nation’s projects
were left vacant until the federal government formally opened them
to African Americans starting in the 1940s.

The history of East Lake Meadows is somewhat atypical in this
respect: The project was built in the late 1960s, well after this
demographic shift was complete. As the residents of the old-money
East Lake neighborhood undertook white flight to nearby Dekalb
County, the owners of a renowned country club sold a prized golf
course to the city of Atlanta, which built the East Lake Meadows
project on top of it.

The complex opened in 1969, and seemed to one early resident a
“real nice area to live in,” but within a few years the
residents found it nearly uninhabitable. Poor site design led to
collapsing culverts and repeated flooding, and apartments built on
the cheap by subcontractors almost immediately saw their floors
sink and their pipes collapse; at the same time, white flight
eroded the city’s tax base, and when police and sanitation
departments lost their funding, projects like East Lake were the
first to suffer. In no time at all, residents were forced to turn
to informal support systems to get by: Burns and McMahon introduce
us to Eva Davis, a ferocious tenant leader who had to fight the
local government to secure welfare payments and basic trash
collection, and Mr. Bennett, whose truck brought fresh vegetables
to the neighborhood every day to make up for the lack of good
grocery stores. 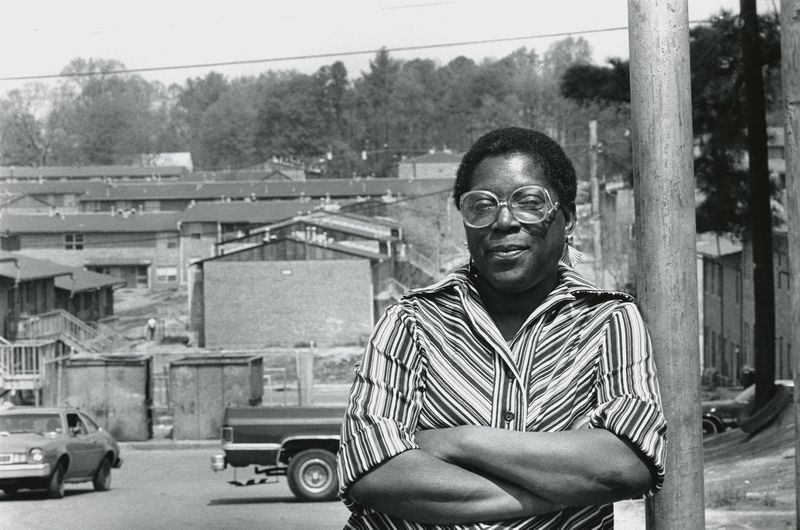 Burns and McMahon’s inclusion of these characters, who are
presented in the form of line-drawn cartoons when they can’t be
interviewed, says a lot about the change in the way we see public
housing. The canonical works about public housing from the 1990s
never come close to defending the virtue of the projects as
communities. Journalist Alex Kotlowitz’s nonfiction book There
Are No Children Here, for instance, follows two young boys as they
try to live normal lives amid the violence of Chicago’s Henry
Horner Homes; meanwhile, Frederick Wiseman’s 1997 documentary
Public Housing, which also takes place in Chicago, brings the
director’s famous naturalistic approach to the dilapidated Ida B.
Wells Houses, showing scenes of drug addiction and police brutality
alongside domestic arguments and kitchen-table conversations.

By the time Wiseman’s documentary premiered, though, public
housing projects in Atlanta and other cities had already started to
come down, East Lake included. Congress and the Department of
Housing and Urban Development had decided almost five years earlier
that it was cheaper to demolish the nation’s high-rise
developments and replace them with smaller mixed-income communities
than to repair them where they stood. The first demolitions at Ida
B. Wells began just months after Wiseman finished filming there;
between 1993 and 2010, the demolition program resulted in the loss
of nearly 100,000 public housing units nationwide.

That same year, though, another documentary pushed the narrative
about public housing in an altogether new direction: The
Pruitt-Igoe Myth, an 84-minute film about a notorious St. Louis
housing project, used detailed archival research to argue that the
project failed not because its buildings were large or its
residents unruly but because the garbage chutes and incinerators
failed, and the downturning city didn’t have enough money to fix
them. Subsequent public housing documentaries, such as 2015’s
They Don’t Give a Damn and 2016’s 70 Acres In Chicago, both
about the Windy City’s Cabrini-Green project, further pushed the
narrative to focus on the negative impact of demolishing the
developments, eschewing a previous focus on what life was like when
they were still standing. Within a decade, the demolition of public
housing had gone from an unfortunate last resort to a betrayal of
residents themselves—a betrayal completed by the insufficient and
long-delayed replacement developments.

East Lake Meadows represents a culmination of this trend toward
rehabilitation. Like recent books such as Ben Austen’s
High-Risers, it doesn’t shy away from the contradictions of the
public housing narrative, the sense in which leaving the projects
up and tearing them down were equally inhumane policies. Indeed,
its structure conveys this duality: Half the film explores why
conditions at East Lake Meadows got so bad, and the other half
highlights the negative consequences of demolishing the
development. But with the exception of a 10-minute segment on the
crack epidemic, little attention is paid to the darker aspects of
life in the projects—the filmmakers, and the residents they
interview, are more interested in community leaders like Davis than
they are in the stereotypical images of crack and gun violence. Works like Wiseman’s never came close to blaming the residents
of public housing for the conditions they endured, but they also
never did much to explain how those conditions had come to be—a
housing project like Wells just was what it was, a mistake that had
to be corrected. The underlying message of East Lake Meadows, by
contrast, is that the failure of any one development doesn’t mean
we need to do away with the concept of public housing. For many
people, moving to East Lake represented a form of salvation from
rural poverty—resident Beverly Parks recalled her amazement on
first seeing the development, saying she “thought it was a real
nice area to live in” and that it freed her from years spent
sharecropping. The destruction of East Lake, meanwhile, hardly
represented an ideal outcome for most families: Residents voted
overwhelmingly to demolish the project and build a new one, but in
the end the new community only had room for 100 of the project’s
400 original families, with most apartments given to middle-class
families. Those who did not return found that many private
landlords in Atlanta would not accept tenants who had lived in
public housing.

East Lake Meadows’s argument that public housing’s failure
was not inevitable comes at an important time for housing policy in
the United States. As the housing crisis worsens in many parts of
the country, calls are growing for the federal government to step
in rather than leave the issue to states and cities. Instead of
subsidizing private apartments, some Democratic politicians have
suggested the government could return to building its own housing,
offering guaranteed shelter to the poorest Americans. Presidential
candidates Bernie Sanders and Elizabeth Warren, for instance,
advocated repealing the
Faircloth Amendment, which prohibits new public housing
construction, and Sanders’s housing plan calls for building
millions of new units of social housing; Rep. Ilhan Omar,
meanwhile, has introduced a bill that would create more than 8
million new units of public housing. 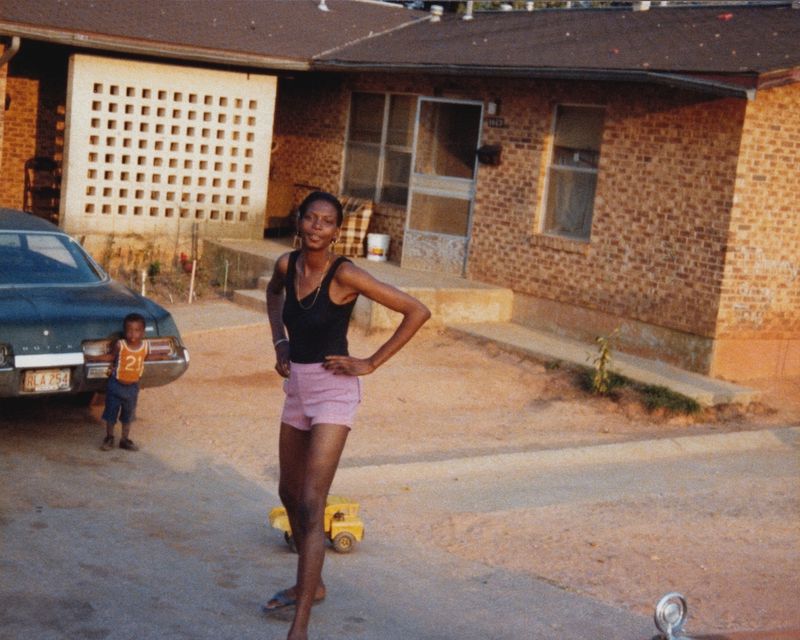 Rosetta
Heath A woman outside of her East Lake Meadows apartment. Early
1980s.

Even if the next Democratic administration doesn’t build any
new public housing, maintaining the nation’s remaining projects
will be challenging enough. Congress refuses to address a $100
billion backlog in capital repairs at public housing developments
across the country, and cities are turning to a new
quasi-privatization program to secure badly needed maintenance
funds. These decisions too are the result of longstanding stigma
against government-owned housing, the same stigma that helped bring
the projects down in the first place.

The trend toward humanistic documentaries like East Lake
Meadows, though, may help show that the projects need not have
been, in the words of one newscaster, “eyesores for those who
live near them and nightmares for those who live in them.”
Despite the dilapidated apartments and the rampant violence, East
Lake was home for the people who lived there. With more investment,
better management, and a kinder government, perhaps the community
never would have become “Little Vietnam.”

At the end of the documentary, Burns and McMahon show us East
Lake’s annual reunion barbecue, where former residents gather in
a nearby park to reconnect and remember life in the project. Just
before the ending credits roll, one former resident reflects on his
time in the development.

“It was a good thing and it was a bad thing,” he says.
“This was where we learned everything we know about everything.
This was our home.”

Source: FS – All – Architecture 10
A new documentary shows how opinions on public housing are changing

ADNOC Awards $1.65 Billion Contracts for the Construction of Offshore Facilities for the Dalma Gas Development Project

I bought an alarm system to feel safe while living alone