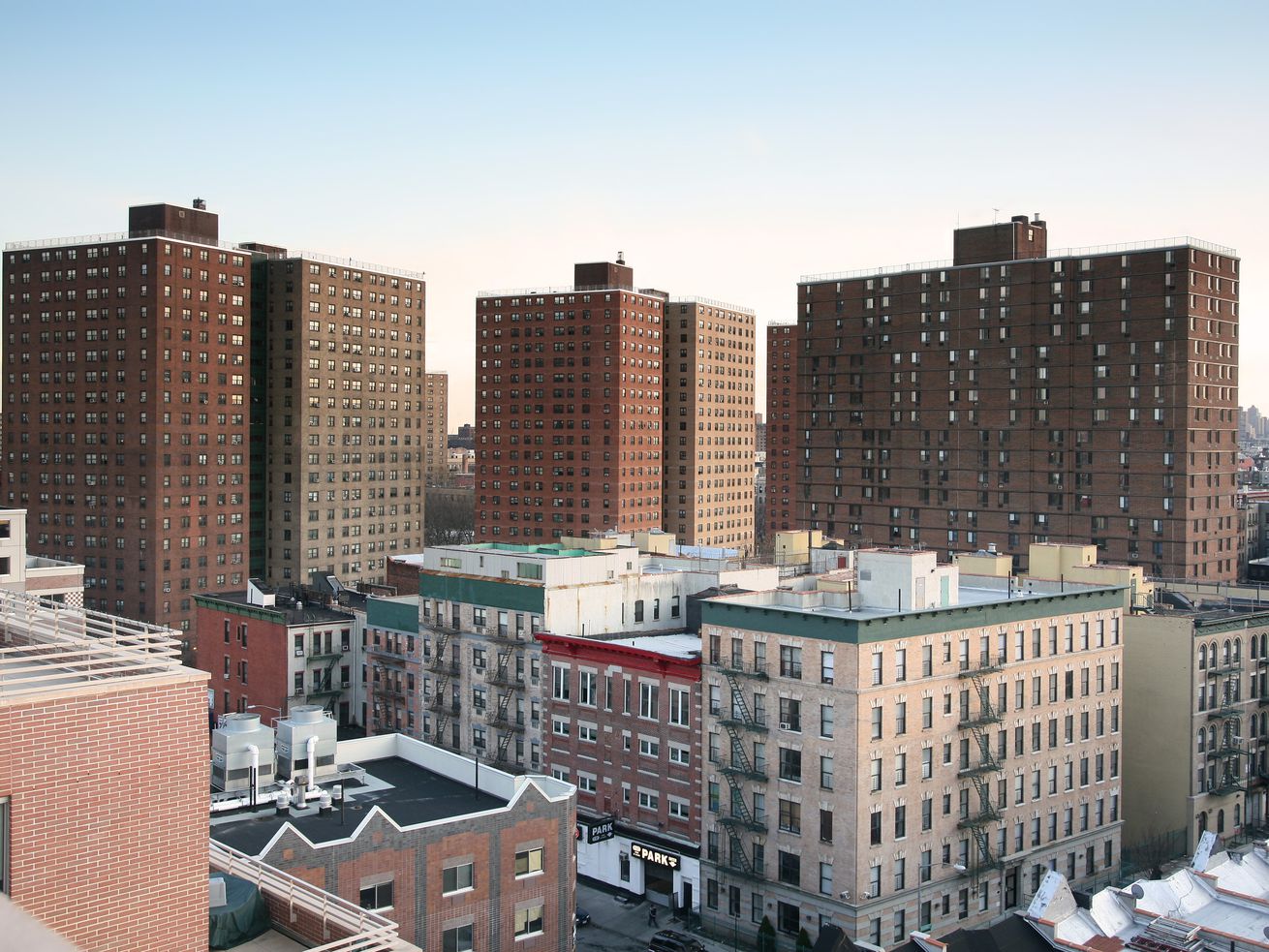 Democrats on the left have proposed a huge expansion of public
housing, but policy experts say it isn’t the answer

Housing policy has lurched into the national spotlight for the
first time in decades in the past year, as most major
Democratic presidential candidates have released formal plans
for responding to
the affordable housing crisis.

And while those plans have tackled everything from local zoning
issues to homelessness, the left flank of the Democratic party is
proposing one solution that hasn’t undergone a major legislative
overhaul in 20 years: public housing.

In November, Rep. Ilhan Omar introduced the
Homes For All Act, which calls for 8.5 million new public
housing units to go with the 1,002,114 that currently exist. A week
later, Sen. Bernie Sanders and Rep. Alexandria Ocasio-Cortez
introduced
Green New Deal for public housing legislation—cosponsored by
Sen. Elizabeth Warren along with 23 other Congressional
Democrats—that calls for a $172 billion investment in existing
public housing units to retrofit them to be carbon neutral and
energy efficient.

“Housing is a fundamental human right,” Omar told Curbed in
a statement. “It’s time we as a nation act like it and end the
housing crisis once and for all.”

Both bills also include a repeal of the Faircloth Amendment, a
22-year-old add-on to the Housing Act of 1937 that prohibits any
net increase in public housing units, and which has returned to the
debate around housing affordability in recent months after being
largely forgotten since its passage in 1998.

But is public housing the best way to help low-income households
with their shelter needs? Or could other measures—such as
expanding Section 8 vouchers for private housing rentals—be more
effective at creating affordable housing in integrated
neighborhoods?

How public housing fell into blight

Public housing tends to conjure images of
dilapidated high rises and high concentrations of
poverty,
crime, and
racial segregation. While it wasn’t always this way, the
program’s problems can be traced back to its inception during the
Depression.

The first permanent public housing program in the United States
was created by the Housing Act of 1937. In order to get the bill
passed over opposition from a real estate industry that feared
public housing would compete with its offerings, Congress limited
eligible tenants to only the poorest Americans.

This led to high concentrations of poverty in public housing
developments, a problem that was exacerbated after World War II
when FHA mortgage insurance drew potential tenants away from public
housing and into homeownership, and it got worse as time went on.
In 1950, public housing residents made 57 percent of the national
media income, according to Housing Policy in the United States, a
book by New School professor Alex Schwartz. By the mid-1990s, that
number had fallen to less than 20 percent.

After a 1935 court ruling prohibited the federal government
from using eminent domain to seize land for building public housing
on its own, Washington instead gave municipalities the option—but
not the obligation—to create public housing authorities (PHAs) to
manage public housing units and decide where they would be built.
Under the control of locals, PHAs often built public housing in
minority neighborhoods with high levels of poverty, as affluent
residents fought economic and racial integration.

Rent from tenants funded the operations of public housing, but
as the income mix of tenants got poorer and the aging housing stock
got more expensive to run, public housing ceased to be
self-sufficient in the late 1960s and began to require subsidies
from the federal government not just to maintain operations, but to
make needed capital improvements to the units themselves.

While new public housing production continued well into the
1980s, the creation of Section 8, as part of the Housing and
Community Development Act of 1974, marked the beginning of a policy
shift away from public housing and toward rent vouchers for private
rentals, first among Republicans and gradually Democrats as well.
Rental vouchers became seen as a more
cost-effective way to subsidize housing than the construction
and operation of public housing. And once the Reagan
administration’s drastic cuts to HUD virtually bought an end to
new public housing projects, Section 8 became the cornerstone of
federal affordable housing policy.

In 1989, Congress established the National Commission on
Severely Distressed Public Housing to draw up a plan of action for
dealing with the public housing projects that suffered most from
poverty, violence, and dilapidated conditions. Two years later,
journalist Alex Kotlowitz published
There Are No Children Here, a heart-wrenching look at the lives
of two young boys growing up in a public housing complex in
Chicago, adding urgency to the search for a solution.

The commission’s recommended plan—what came to be known as
HOPE VI—called for the demolition of distressed public housing
and its redevelopment into lower-density, mixed-income residences.
The Quality Housing and Work Responsibility Act (QHWRA) of 1998
included a key change that allowed HOPE VI to achieve its goal of
downsizing public housing: It repealed a rule that had required
replacing any demolished public housing on a one-for-one basis,
which had essentially prevented any decrease in the total number of
public housing units.

The units redeveloped by HOPE VI offered better amenities to
attract higher-income residents, and management of the new
complexes was often contracted out to a third-party property
manager. But it’s an open question whether HOPE VI improved the
lives of residents of the demolished buildings. According to
Schwartz, only 24 percent of the original residents of public
housing units redeveloped by HOPE VI had been relocated to the new
units as of 2008. The rest have had to find other housing on their
own.

Public housing high-rises, once a symbol of public housing
dysfunction, have now all but vanished except in New York City. And
after HOPE VI, some cities saw drops of 30 percent or more in their
public housing unit totals.

Bipartisan efforts continue to convert public housing units into
mixed-income residences and Section 8 units. In 2010, HOPE VI was
replaced with Choice Neighborhoods, a competitive grant program
launched by the Obama administration that retains many of HOPE
VI’s core goals. In addition, the Rental Assistance Demonstration
program, launched by Obama in 2012, gives PSAs access to private
and public funds that allow them to make capital improvements to
public housing units and convert them into mixed-income
residencies, similar to HOPE VI. The units remain under public
stewardship after conversion.

What stands in the way of new public housing
construction

While Congress and HOPE VI allowed the reduction of public
housing stock, the Faircloth Amendment, passed as part of QHWRA in
1998, went one step further and prevented any net increase in
public housing stock. Under the amendment, HUD is barred from
funding the construction or operation of new units with its Public
Housing Capital Fund or Public Housing Operating Fund if the
construction of those units would result in a net increase from the
number of units as of October 1, 1999.

But because of HOPE VI’s reductions in the nation’s public
housing stock, the Faircloth Amendment has had little tangible
effect, since the number of public housing units now sits far below
that 1999 cap. Will Fischer, a senior policy analyst for the Center
on Budget and Policy Priorities, notes that although the number of
remaining units varies from city to city, many PHAs could add to
their public housing stock without exceeding the cap.

What’s holding back the construction of new public
housing—and the maintenance and operations of current public
housing—is that the Public Housing Capital Fund and the Public
Housing Operating Fund are chronically underfunded, leading to

a massive backlog of maintenance that many PHAs can’t afford
to pay for.

Furthermore, the Trump administration has proposed dramatic cuts
to both funds in each of its four annual budget requests, including
a 38 percent cut to the operating fund and a complete defunding of
the capital fund for fiscal year 2020. (None of the cuts were
enacted by Congress.)

“Most [PHAs] are having a hard enough time maintaining
existing units, unless Congress has a drastic change of heart and
decides to throw a lot more money at HUD,” says Jenny Schuetz, a
research fellow at the Brookings Institution.

But the Faircloth Amendment would clearly stand in the way of
building 9.5 million new public housing units, as Omar’s bill
proposes, an almost tenfold increase in the number of public
housing units.

The bill represents one side of a debate about how to subsidize
public housing most effectively. HUD studies
have concluded that it’s cheaper to subsidize housing through
vouchers than it is to operate and maintain public housing units.
Vouchers also give recipients more choice in where to live,
although
landlords discriminating against voucher holders is a common
drawback of the program.

Giving residents more opportunity to move also helps alleviate
the issue of high concentrations of poverty that exist in public
housing complexes.
A Brookings study showed that the neighborhood poverty rate was
lower for voucher holders than it is for public housing residents.
It also allows voucher holders to move to areas with better
employment and
educational opportunities.

“Some of the candidates may be proposing a return to building
public housing, which I find perplexing,” says Jill Khadduri, who
served as director of HUD’s policy development division from 1983
to 2000 and wrote a book on the
history of HUD. “Unless there’s an ideological belief in
public ownership, which I can imagine some of the candidates find
attractive, I don’t know what the impetus is or what the
rationale is.”

Vouchers have their own funding problems, however. Currently,
only about a quarter of those who qualify for vouchers receive one,
and the waiting list to get one can be years long.
Democratic candidates for president, including
Sanders and Sen. Amy Klobuchar, have proposed turning the
voucher program into an entitlement, where anyone who qualifies
will receive one, although they propose different
qualifications.

Democrats who propose additional investment in public housing
tend to focus on eliminating the backlog of maintenance in existing
public housing projects through additional funding of the Public
Housing Capital Fund.

For additional affordable housing production, more Democrats
propose expanding
the Low Income Housing Tax Credit Program—which gives real
estate developers tax benefits in exchange for pricing a percentage
of their units below market rate—or the National Housing Trust
Fund, which was created by the Obama administration in the
aftermath of
the financial crisis in 2008 for the rehabilitation,
maintenance, and production of affordable housing.

Omar’s bill proposes $20 billion in annual funding to the
National Housing Trust Fund, a steep upgrade over the $245 million
the fund received in 2019, but less than the $40 billion or more
floated by candidates like Klobuchar, Booker, and Buttigieg. And
the figure pales in comparison to the $800 billion over 10 years
that Omar would invest in public housing.

“We’re not going to solve the housing crisis with
half-measures or free market ideology,” Omar told Curbed in a
statement. “We need a solution that matches the scale of the
problem.”

With a divided Congress and a president who wants to
dramatically slash HUD’s budget, Omar’s bill was dead on
arrival, but reintroducing public housing as a potential solution
to the affordable housing crisis could gain momentum in the coming
years, particularly with support from high-profile members of
Congress like Sanders and Ocasio-Cortez.

But whether public housing production of this magnitude could
pass Congress—even if Democrats took power—is an open question,
as is whether it is the most effective way for the federal
government to provide rent relief to low-income Americans.

Source: FS – All – Architecture 10
Affordable housing is in crisis. Is public housing the solution?