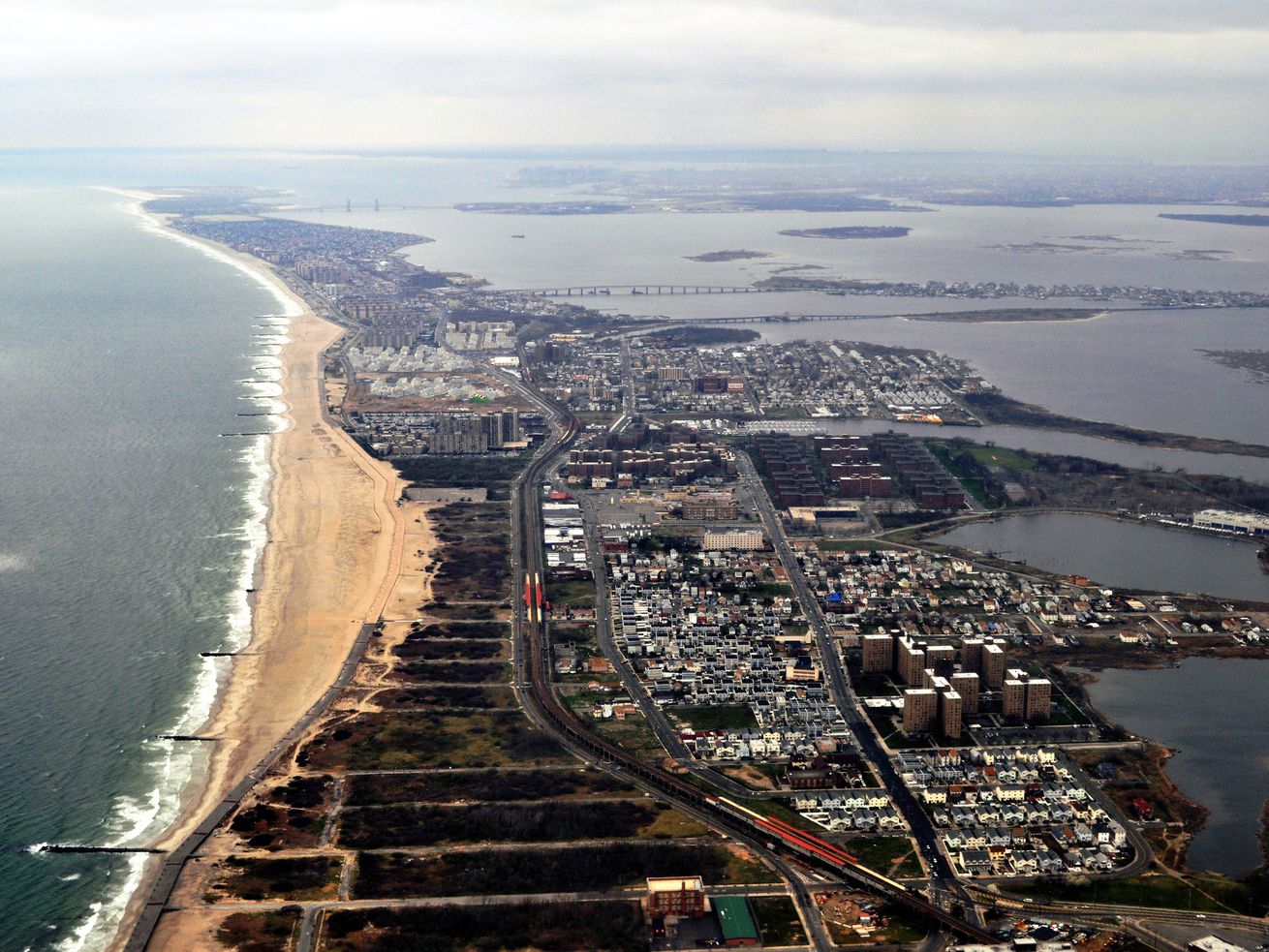 The
Edgemere section of the Rockaways. | Joe Mabel/Wikimedia

Neighborhoods like Edgemere, Queens, now have to wait even
longer for major housing projects to rise.

On his 25 minute walk to work through Edgemere — the low-slung
beachfront neighborhood of old clapboard houses and public housing
east of the newly
fashionable Rockaway Beach — Richie Jackson says he might
only pass a couple of delis or fast-food joints. “This isn’t
Main Street America we’re talking about here,” said the
52-year-old, who lives in NYCHA’s Ocean Bay complex. When the
neighborhood was first developed over a century ago, it was
marketed as “The New Venice,” but these days the only thing it
has in common with that storied city is that both are under the
constant threat of rising sea level; it was among the areas in the
city hit hardest by Hurricane Sandy, and while the city has developed a plan to remake the
area, it’s still years away from being fully realized.

More recently, Edgemere also became
one of the New York City neighborhoods hit hardest by the
coronavirus. “You gotta go outside the neighborhood to get what
you need,” Jackson says. He lugs his groceries home at the end of
his shifts at a Key Food outside of the neighborhood because
Edgmere lacks a supermarket. “When it comes down to it, we just
need more here, especially now that we’re all hurting from
COVID.”

A few years ago, a major project was proposed to address some of
the issues in the neighborhood. That development was Edgemere
Commons — a massive mixed-use affordable-housing project planned
by The Arker Companies that would be located just off of Beach
Channel Drive and Beach 53rd Street. It would be made possible by
city financing. First proposed in 2018, the 11-building project
would cluster 2,050 apartments on the site of the former Peninsula
Hospital (since the Peninsula closed, the hospital nearest to
Edgemere has been St. John’s Episcopal, which is roughly two
miles from the heart of the neighborhood), and bring a supermarket
to
the federally recognized food desert. The project was also
expected to build other commercial retail locations, an urgent-care
facility, and a new community center.

Affordable housing projects like this one were supposed to be
Mayor de Blasio’s legacy. But now Edgemere Commons, like so many
other developments of its kind, are facing major delays because of
the city’s perilous pandemic budget shortfalls.

At the end of June, City Hall threw the future of many of the
city’s affordable-housing projects — and the community
resources that typically come with them — up in the air when it
slashed the Department of Housing Preservation and Development’s
(HPD) capital budget, which is used to fund physical
infrastructure, by more than a billion dollars for the fiscal years
2020 and 2021. The move pushed a staggering 40 percent of HPD’s
capital funds for affordable housing into later fiscal years.

Those cuts mean fewer dollars are available for building new
homes for low- and middle-income New Yorkers in the short term. The
budget crunch also throws a wrench into the complicated financing
schemes and timelines for projects already in the works, like
Edgemere Commons. Many developers who rely on city subsidies —
which are pivotal to the mayor’s pledge to preserve and build
300,000 affordable homes by 2026 — had hoped to finalize city
funding by the end of this year, but are now planning for many
months, if not a full year, of delays. June is usually a busy month
for HPD to close projects, but this year it finalized just 22 small
developments. A budget analysis
conducted by a local housing-advocacy group, the New York Housing Conference, expects
those shortfalls to translate into roughly 20,000 fewer new and
preserved affordable homes over the coming years.

“City Hall is saying that we’re delaying these projects, but
what does that mean in reality?” said Rachel Fee, the executive
director of the New York Housing Conference. “If you’re a
nonprofit organization, how long can you carry a site you need
financing for? Predevelopment costs are real and they’re
significant. There’s a real cost to the delay, both for the
developers and communities.”

The immediate costs are the loss of jobs and the delays to
infrastructure for low-income communities, many of which were hard
hit by COVID-19. And the upheaval comes as the city grapples with a
ballooning homeless population while teetering on the edge of an
eviction crisis. In the long run, scaling back on affordable
housing developments would not only make it harder for those
financially crippled by the pandemic to find new housing, but it
would also reduce the supportive resources these projects often
come with that are key to building healthy neighborhoods.

“These projects take so long to get done, especially the ones
requiring re-zonings, if we’re not constantly replenishing the
pipeline, then we don’t have enough projects to meet our
affordable housing goals,” said Scott Short, the CEO of RiseBoro
Community Partnership (a developer). Because of all this
uncertainty, RiseBoro has had to abandon a project under contract
in the South Bronx that would have brought 70 units of senior
housing to the neighborhood. And another of its developments, in
Brownsville, where Riseboro aims to build 240 apartments — 60
percent of which would be set aside as supportive housing for
formerly homeless families — and a supermarket, is in jeopardy.
“I’m concerned that [the budget cuts and delays] will lead to
more homelessness and more people getting pushed out of the
neighborhoods they call home,” Short added.

In Edgemere, delays would threaten thousands of apartments
designed with the community’s low-income, Black residents in
mind. Delays could also jeopardize amenities intended to rejuvenate
the often-overlooked neighborhood. In the context of the
coronavirus, residents say the project and the jobs it would
generate are even more crucial. “This would bring life to a
community that is literally on the brink of death,” said Milan
Taylor, a lifelong Edgemere resident and founder of the Rockaway Youth Task Force. “It’s an
understatement that before the pandemic this was an important
project, and now post-pandemic, it would be a lifeline.”

Arker, the developer behind Edgemere Commons, made it through
the city’s nine-month land-use review process late last year and
is now waiting on city financing for the first phase of
construction; that includes for 450 apartments and a Western Beef
supermarket. The project, which was designed with climate
resilience in mind, would be built in five phases over 14 years.
The effort was expected to break ground this year, but Daniel
Moritz, a principal at Arker, calls that timeline
“questionable” and worries about what the backlog could mean
for neighborhoods throughout the city. “There’s just an
insatiable demand for affordable housing,” said Mortiz, whose
firm recently built an East New York building with 267 apartments
that received a whopping 50,000 applications through the city’s
affordable housing lottery. “Delays are definitely going to hurt
the neighborhoods we’re trying to build in.”

That uncertainty worries 19-year-old Andrea Colon, an economics
student at Baruch College, who lives in Far Rockaway with her
mother and sees the apartments Edgemere Commons would bring as a
potential anchor for the area’s youth. “It really comes down to
brain drain,” said Colon, who says a lack of below-market housing
has meant college graduates who want to remain have little choice
but to move elsewhere. “That’s why this project is really
important because it addresses that need. When I graduate, I want
to move out but it’s not easy to find affordable housing here,”
Colon continued. “Many buildings are at capacity, there’s long
waitlists. There’s definitely a barrier to entry.”

But those who are able to stay in the area face shortages of
everything from laundromats to bookstores to supermarkets. The U.S.
Department of Agriculture classifies the neighborhood as a food
desert, where the vast majority of residents have to walk at least
half a mile to reach the nearest supermarket. That’s why Taylor
founded the Rockaway Youth Task Force Urban Farm on Beach 58th
Street. At weekend farm stands, residents can purchase juicy
tomatoes, crisp carrots, and much more from the one-acre grow
space. But they’re struggling to keep up with demand. There is a
wait list of more than 100 for the community garden portion of the
farm. “It just highlights the dire need,” said Milan.
“There’s never enough.”

The city, for its part, is also working to bring much-needed
infrastructure and affordable housing to Edgemere while mitigating
flood risk through the Resilient Edgemere Community
Plan, which will be implemented over the next several years.
But it remains unclear when the city will be able to close on
Edgemere Commons. “Given the budget crisis, tough choices had to
be made but HPD continues to work hard on closing the deals it can,
giving priority to projects serving seniors, homeless households
and the lowest income individuals and families,” Jeremy House, a
spokesperson for HPD, said in a statement.

The city has called on the federal government to approve a
massive stimulus package that would keep its development pipeline
moving. But in the meantime, it has been forced to get creative
about how it stretches the limited dollars it does have. In late
August, HPD financed three new affordable-housing developments in
Brooklyn and the Bronx that will create 400 apartments for
low-income and formerly homeless New Yorkers through a partnership
with the New York City
Housing Development Corporation, which was created by the New
York State Legislature and is independent from the city’s capital
budget.

But for locals anxiously awaiting information about developments
in their neighborhoods, each month that passes deepens the
uncertainty. “This project literally screams righting inequities
in terms of what wasn’t and what can be,” said Taylor. “And
if this project doesn’t move forward you will see many, many
folks within this community saying they’re not surprised that the
city continues to disinvest in us.”