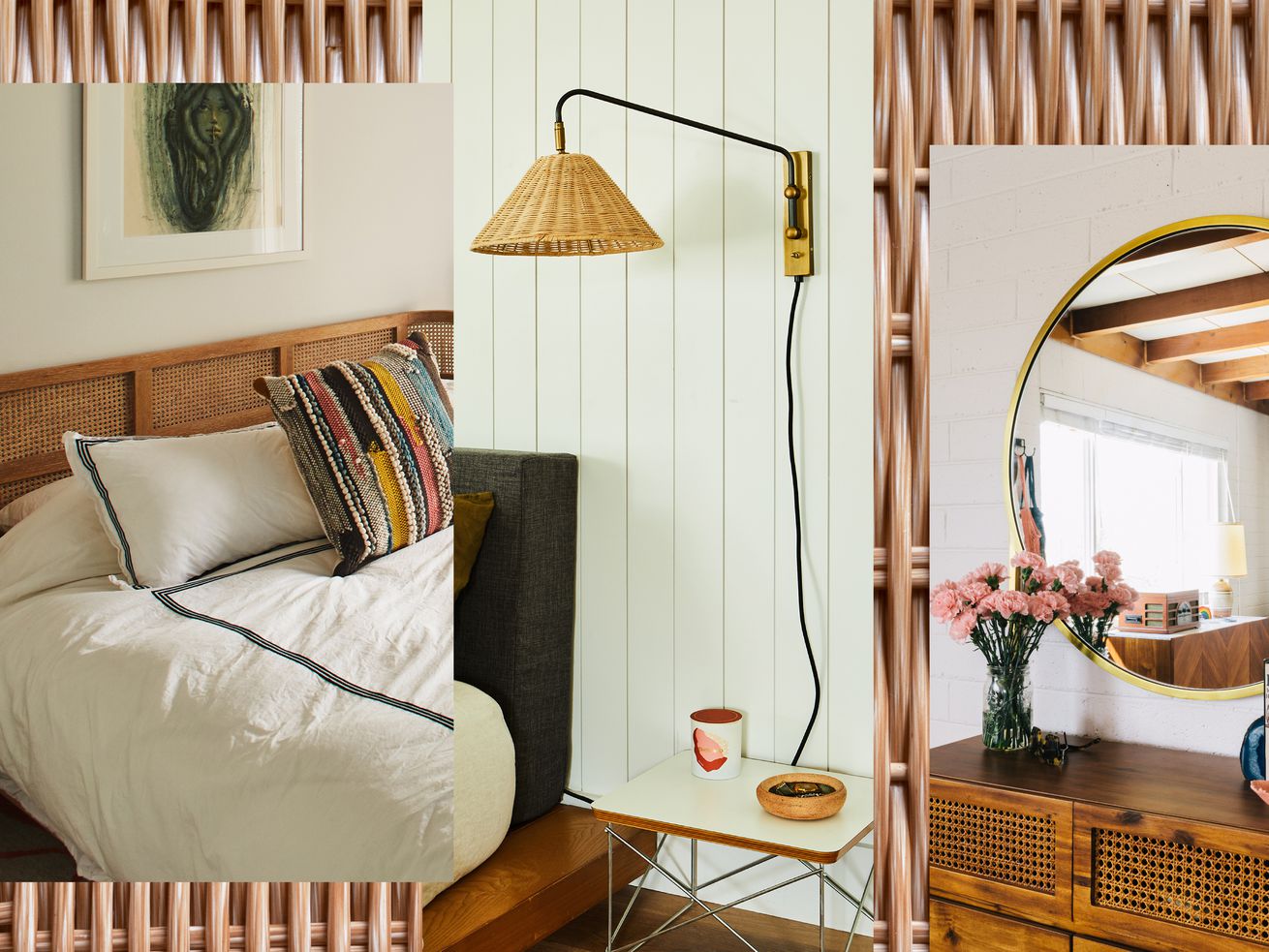 In our tech-filled homes, the decidedly analog material
endures

Some textures are so ingrained in our visual vocabulary that
they act as neutrals. Like glossy white subway tile or the
sprightly tail of a pothos plant, the six-way honeycomb pattern
most associated with cane furniture exists in a room without
distracting from it. Cane, which can be woven into virtually
anything, is a material that complements: It makes a room look
better, more pulled together, more thoughtful than a simpler,
denser material would.

In the past few years, cane products have appeared from
retailers catering to all budgets—upmarket designers like
Kam Ce Kam, but also

Industry West has one, too. Cane has appeared in a number of
public spaces: take the oversized armchairs in the Manhattan
waiting room of “healthcare membership”
Parsley Health, and the translucent, half-glass doors at a tea
house from lifestyle brand Genshang in
Shanghai. This past summer, a coworking
space opened inside Raffles, the iconic Singapore hotel,
featuring cane chairs and bars. This material makes sense for
tropical locations, but cane appears more often than you might
think in temperate-climate office spaces, too, including
the Nest in Warsaw and
Public Hall in London. In restaurants, cane is a key ingredient
in seating, like the bentwood chairs at
all-day cafe Lou, in
Nashville, but it has other uses, too, as in the New York dining
rooms of Fausto (room
dividers) and King
(window sashes).

Unlike many of the textures that populate our interiors
(poly-blend blankets, particle-board tables, steel table legs with
a brass finish), the cane available at most retailers, as one
component of furniture or decor, is actually an organic, unmediated
material. Cane is the outer part of the rattan tree, which grows
like a vine in thick, winding strands. The inner core of the

rattan vine is one of several materials, along with bamboo,
willow, and raffia, that, when woven, falls under the larger
classification of wicker. Despite its close relationship with the
category, cane doesn’t share wicker’s
chintzy connotation. 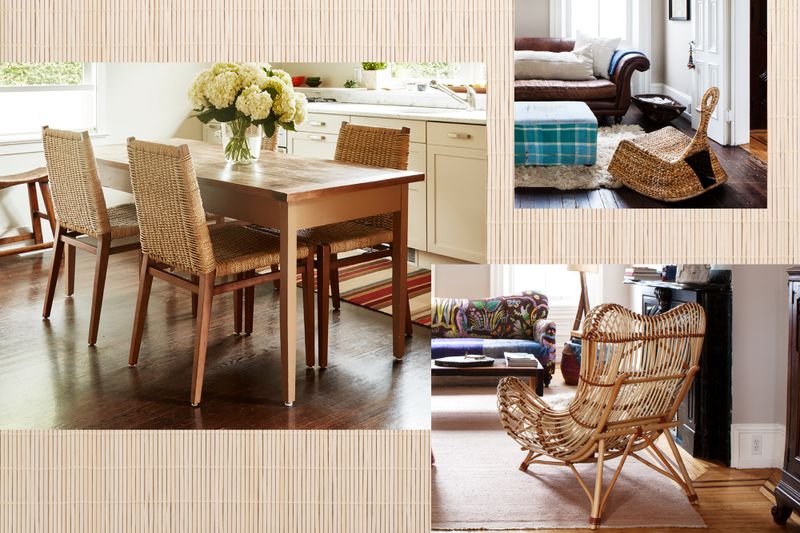 Six-way cane, which has come back into fashion and Instagram
feeds recently, is a manmade pattern woven from strips of rattan
bark. It provides a springy, supportive alternative to cumbersome
upholstery or hard (and expensive) solid wood seats. To create a
panel of cane, you begin with a frame with holes along the
perimeter. You then thread two strips of cane from the front to
back, two strips from side to side, and two more diagonally. Once
woven, sometimes cane is paired with steel, but more often, panels
of it appear in wood frames on things like space dividers, armoire
doors, nightstand drawers, and headboards. It lightens any design,
replacing what would have been an opaque piece of wood with a
light-diffusing, eye-catching pattern.

The flexibility of cane—both physically and stylistically—is
its greatest asset. It feels less disposable than other materials
used to make furniture. And it is. When cane panels break, they can
be repaired. There are no springs, stuffing, or pieces of wood to
source. Cane strips or pre-woven sheets of webbing are uniform and
easy to find. It’s a pliable material that gives a touch of
“naturalness” to any setting, something especially appealing in
tech-filled spaces. Like linen, another of-the-moment material with
tropical connotations that feels equally fitting in a city
apartment, cane softens a space. Its organic look is a visual
palate cleanser after a long day of pecking and staring at plastic
and metal. Cane catches your eye, then does little else.

Cane chairs are a product of colonialism in a literal sense. As
Jordan Sand writes in
Tropical Furniture and Bodily Comportment in Colonial Asia,
rattan and its byproduct, cane, were used widely by native
populations in Southeast Asia to construct everything from hats to
houses. But cane furniture was not a common feature in these homes,
where floor-sitting was the norm. Instead, Chinese and European
colonists, with their chair-sitting traditions, had a need for
seating in the lands they colonized, and satisfied it using readily
available material: rattan.

Rattan originally arrived in the Western world as packing
material for more valuable goods like spices and tea imported from
Asia by the East India Company starting in the 17th century. It’s
unclear when craftsmen in England started weaving cane in the
six-way pattern, but there’s evidence that this technique existed
in China since at least 250 B.C. In 1950, archaeologists at an
ancient tomb site in the Yellow River Valley uncovered a fragment
of six-way cane between layers of sand. The scrap was so fragile
that it disintegrated when the area was excavated, but the pattern
left a six-way impression on a nearby piece of clay, like a shred
of a Dior bag. (Cannage has been a motif in Christian Dior designs
since the 1950s, a reference to the Napoléon III-style cane chairs
the designer used to seat guests at his early fashion shows.)

Thanks in part to the sleekness of Marcel
Breuer’s Cesca chair, cane has a more modern connotation than
other members of the wicker family. You’ve probably seen the
Cesca chair, or at least a version of it. It has rounded edges and
a cantilevered, tubular steel frame. Food writer Alison Roman has a
set in her dining room (you can see glimpses of them in her

Into the Gloss Top Shelf interview and the B-roll of her
New York Times
Thanksgiving video). They’ve almost become a category of
seating rather than a style, an alternative to heavy, four-footed
wooden chairs or fiberglass shells.

Cesca chairs weren’t made to go with any particular table, or
in any particular room. The design came out of the Bauhaus in 1928,
but didn’t take hold in America until after World War II, and
even then, it was a kind of architectural darling. Sam Kaufman,
owner of a midcentury furniture gallery in Los Angeles, tells me
that in the 1960s and early ’70s, you’d see Cesca chairs in
Architectural Digest, as part of “sophisticated dining rooms,”
but they weren’t yet a mass product. But by the late 1970s and
’80s, less expensive versions of the chair (the design was

never patented) started to appear in American workspaces and
homes. There’s a set of Cesca chairs in a kitchen in Woody
Allen’s 1978 film Interiors and a single chair opposite a
mid-level employee’s desk in Albert Brooks’s 1985 yuppie satire
Lost in America. In the span of a decade, the chair had become
shorthand for conformity. The Cesca chair,
wrote Washington Post architecture critic Sarah Booth Conroy in
1981, “is in almost every breakfast room today, as the Thonet
chair was in every cafe at the turn of the century.” 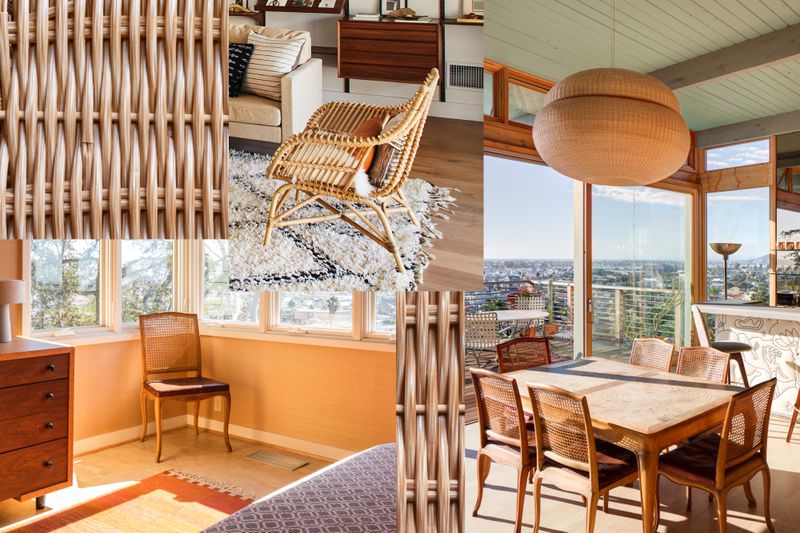 You’ve probably seen a Thonet chair, too. It’s made with
bentwood and cane, and like the Cesca, its design is ageless and
often imitated. There are a number of variations, but each has a
lithe, curved back and a round seat. The legs flare out slightly,
like petals on a bellflower. Thonet chairs, designed by German-born
cabinetmaker Michael Thonet, were exported from Vienna starting in
the 1850s. As Witold Rybczynski writes in Now I Sit Me Down: From
Klismos to Plastic Chair: A Natural History, Thonet developed a
technique to bend whole pieces of wood, which could be shipped flat
in bulk. In effect, Thonet created the first mass-produced,
flat-packed furniture. Like the Cesca chair, Thonet chairs were a
late bloomer in home design, and enjoyed an “unexpected
revival” in the 1920s, when French architect Le Corbusier started
using them in his drawings and exhibitions. And like the Cesca
chair, bentwood furniture also had a (second) comeback in the
1970s.

Though cane has a long history in interiors prior to Thonet’s
designs of the 1850s, it benefited significantly from
industrialization, which made it possible to create furniture on a
large scale relatively inexpensively. It’s no accident that two
of the most widely produced seats of the last two centuries are
made with six-way cane. The inherent quality of the material,
paired with the attractive, simple designs that employed it, helped
make cane furniture a global product.

Today, most of the world’s cane comes from Indonesia. It is
then mechanically manufactured in China and brought to the United
States through one of two major importers, both located on Long
Island. Veterans
Caning is a family-owned repair and service business that’s
been in Manhattan since 1899. Sean Bausert, who now runs the
operation, says that, despite the ebb and flow of home decor
trends, there’s always been a consistent market for caning
services. Classic cane can fit into any setting, and it’s been
used on furniture in many different styles for hundreds of years.
People tend to keep cane furniture, Bausert says, and repair it
rather than get rid of it. It makes sense that cane is one of those
things—like hoop earrings or serif fonts—that always seems to
be in the midst of a revival. “Now that the old-fashioned cane
furniture has become new-fashioned and is so popular, homemakers
are resurrecting from the garret and cellar their old broken cane
chairs.” That’s from
a 1933 educational brochure on chair repair.

Mechanized weaving has existed in this country since the middle
of the 19th century, but there’s still a small, strong community
of handweavers across the world, many of whom are now connected
through the internet. One of these weavers is Brandy Clements, who,
along with her husband, David Klingler, owns and operates the
Silver River Center for
Chair Caning, located in Asheville’s River Arts District. In
recent years, she says, she’s had more young people take her
classes as cane has gained popularity, including a good number of
international visitors. People have come from as far as France and
Tasmania to learn how to weave at her center near the Great Smoky
Mountains. 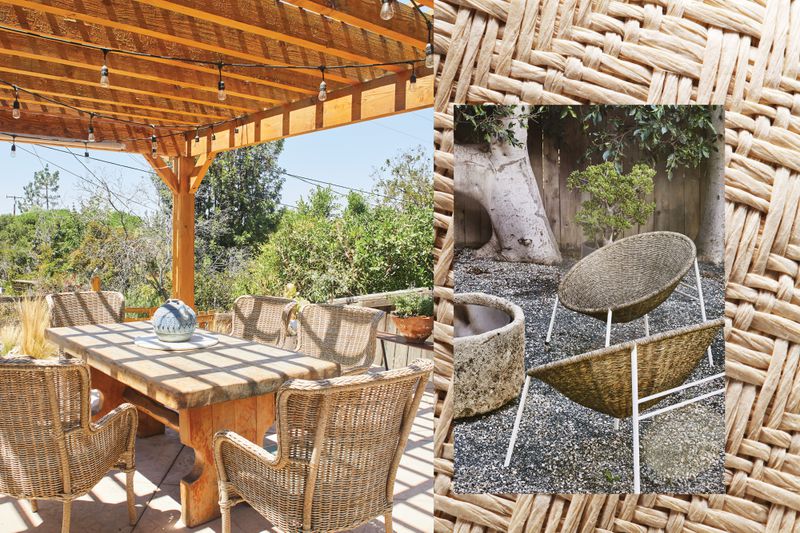 Why is there so much interest in cane now? Perhaps it’s
because cane furniture offers a vision of the future that’s
grounded in natural materials. The success of the Cesca chair, as
opposed to other Bauhaus designs, is its ability to blend the old
and the new. An ancient material (cane) comes together with an
almost absurdly modern one (tubular steel) to create something
that’s comfortable, attractive, and durable. It’s an emblem of
mass-produced handiwork.

It helps, too, that cane is more interesting to look at than
wood laminate. People tend to dress their rooms the way they dress
themselves. Combining style reference points has become de rigueur
in fashion and interior design. Few people wear head-to-toe
designer anything anymore, much less stick to one decade for
inspiration (you can wear a scrunchie, but it’s best not to pair
it with a sweatshirt). Instead, you pick and choose the elements of
past fashions that appeal to you.

Cane appeals to many because its reference points are so
muddled. It’s hard to pin down, and that’s what people like
about it. It works in a space without defining it. It makes sense,
in a room that may have a flat-screen television along one wall and
a cushy, tufted sectional on the other, to create a focal point
that’s less reflective, less imposing, and more
old-fashioned.

Rachel del Valle is a
writer living in Los Angeles. Her last story for Curbed was about

Sleek charred wood cabin puts a twist on the A-frame