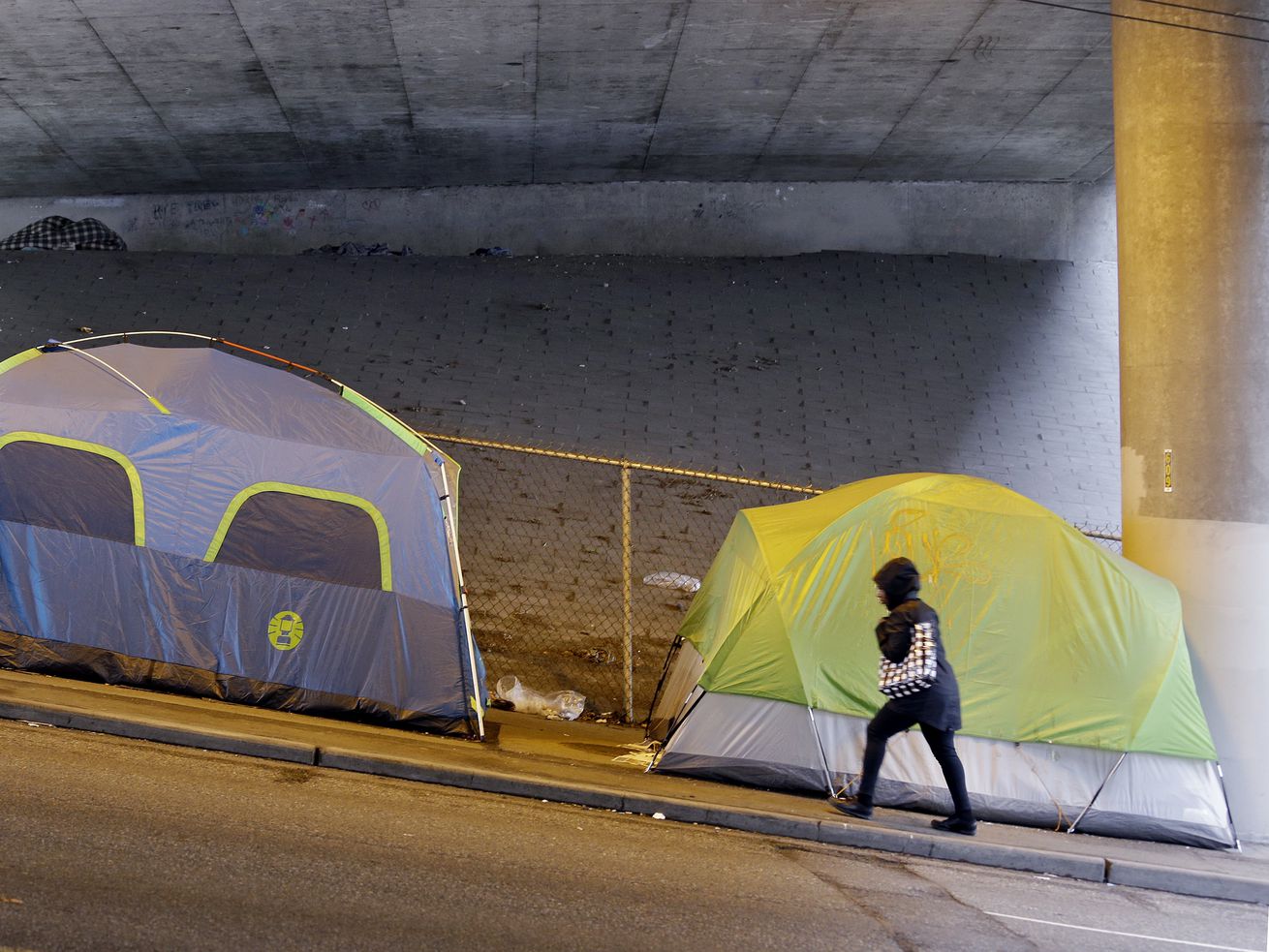 Seattle’s
King County, which has reported the most Covid-19 deaths, is home
to the country’s third-largest homeless population. | AP
Photo/Elaine Thompson, File

Stay home, stock up on food, wash hands frequently. Stephanie V
is acutely aware of what public health officials are recommending
she do to prevent
Covid-19, the illness caused by the novel coronavirus. It’s
just completely unreasonable—if not impossible—for her to
follow the advice, says Stephanie, who lives in her car in
Lakewood, Washington, a suburb of Seattle, with her dog and cat.
“It’s pretty frustrating if you don’t have a home.”

Like many Americans with limited resources, the
coronavirus outbreak has made Stephanie’s life even more
complicated. “I can’t stock up on anything to get me through an
extended period of illness,” she says. “I would have to go out
every couple of days at least to get fresh food since I can’t
store anything that needs to be refrigerated or heat anything up. I
also need to be able to wash my hands and use the restroom, which I
can’t do in my car. Plus I have a dog that needs to be taken out,
so even if I’m sick, I have to take care of her.”

Hand-washing has been a particular concern for Stephanie since
shelves were emptied at local stores, with hand-sanitizing products
nearly impossible to find. She didn’t expect people to go on

panic-buying sprees for the essentials that she relies on.
“Since I live in my car, I always have some hand sanitizer,”
she says. “But I don’t know if I have enough.”

With community transmission of Covid-19 reported in several
places in the U.S., many public health officials have moved

past the hope of containment and are trying to mitigate the
risk to vulnerable populations who are
most likely to get very sick or die—namely people who are
over 60, people who have weakened immune systems, or people who
have underlying health conditions. Technically, that defines much
of the homeless population in the U.S.

An estimated 500,000 Americans experience homelessness on any
given night, many of whom are also experiencing chronic health
issues including long-term illness, injuries, disabilities, or
compromised immunity. The U.S. homeless population is also aging,
with the number of people over 65 experiencing homelessness

increasing in recent years due to housing affordability issues.
Homeless individuals are also more likely to sleep in shelters,
camps, or other living situations where a respiratory virus is more
likely to spread.

“Living outside is very dangerous, and this is one of many
reasons why,” says Steve Berg, vice president of programs and
policy for the National Alliance to End Homelessness, which has
published
resources for service providers along with U.S.’s
federal homelessness agency. “All the public health stuff you
can do to keep people safe is going to be a lot harder to do if
people don’t have their own places to live so they could be
quarantined just like everyone else.”

Concerns about the
vulnerability of the country’s homeless population are even
more acute in cities on the West Coast, where a majority of the
country’s unsheltered community lives. In Los Angeles,
44,000 people across the region sleep in vehicles, tents,
camps, and on sidewalks on any given night—the largest
unsheltered population in the country. An estimated three unhoused
people die in LA County every day, according to a
report by public health officials, a number that has doubled
over the last five years. In recent years, the city has struggled
to open enough temporary shelter facilities, called “bridge
housing,” to give its growing unhoused community places to
sleep.

Last week, LA County’s health department provided
guidance for shelters, including increasing the distance
between shelter beds and options for potentially quarantining
individuals, with teams doing checks of facilities. Homeless
residents are a “high-priority population,” says LA County’s
health director Dr. Barbara Ferrer, who proposed that LA’s winter
shelters, which are open during inclement weather, could be opened
for more extended periods of time. “We can’t tell people to
stay home if they’re sick,” she said at a press conference
today. “We want people who are sick to go off the streets.”

But with a week of rainstorms on the way for the region that
would likely overwhelm those winter shelters, some service
providers were frustrated the city was not advancing a more
comprehensive strategy. “Seriously, what’s the plan for those
not in shelters?” says Pete White, executive director of the Los
Angeles Community Action Network, which held its own coronavirus
briefing for unhoused individuals and service providers on Friday.
“Necessary sanitation infrastructure should’ve been installed
already.”

That infrastructure could make the difference between life and
death for the unhoused community. After the severe acute
respiratory syndrome (SARS) outbreak of 2003, a Toronto
study recommended that large cities draft specific plans for
how to protect unhoused communities for a similar viral outbreak,
including how to conduct rapid medical outreach and provide
emergency housing. Stephen Hwang, a professor of medicine at the
University of Toronto and one of the study co-authors, says that
taking large-scale efforts to protect unhoused residents would be
an “appropriately cautious” response.

But Hwang also cautions that these concerns are not just about
homeless individuals. People living in shelters may be more

susceptible to contracting the virus due to the way it
spreads—but no more so than people living in military barracks or
who are on cruise ships, says Hwang. “It’s not not about
socioeconomic status, it’s close quarters that create a condition
for spreading.”

In the SARS outbreak, Toronto had a total of 375 people infected
and 44 deaths before the virus was brought under control in the
summer of 2003. As of Monday night, Washington state had recorded
162 Covid-19 cases with 22 deaths. Those numbers are likely
understating the extent of infection. A new report out today

“Seattle is a wakeup call for everyone else,” says Hwang.
“Those of us who were around SARS, having that experience really
prepares you for what to think about in advance and how
aggressively one needs to make plans and preparations, knowing how
bad it can get.”

Last week, Seattle Mayor Jenny Durkan announced an
expansion of shelter beds, including opening several new
emergency shelters. In King County—which encompasses Seattle, and
where
19 coronavirus deaths have occurred in a single healthcare
facility as of Monday night—also has the third-highest homeless
population in the country. As of this week, officials had
purchased a motel, planned to set up
modular housing units, and were looking at four other potential
properties to be used to quarantine unhoused individuals if
necessary.

San Francisco was one of the first U.S. cities to declare a
coronavirus emergency in mid-February, providing detailed
information for service providers who manage the care of 25,000
people living in the city’s shelters. Yesterday, the city
announced a
separate public health order just for its homeless population,
with $5 million allocated to clean shelters and service centers,
expand shelter hours and meal offerings to encourage healthy
homeless individuals to remain in shelters, and provide meal
delivery services to at-risk people who have been told to stay
home.

Regular check-ins with trusted providers are important in
situation like this, says Kris Kepler, chief program officer for
Lava Mae, which provides showers and other services to homeless
individuals in the Bay Area through mobile healthcare units. “Our
guests aren’t as clued in to how serious it is—they’re just
trying to survive day-to-day,” she says. “What we’ve seen,
especially with the public health department in San Francisco, is
doing outreach to talk to people and address the situation so
everyone is on the same page for the message.”

Back in LA, two city councilmembers introduced a motion last
week to
place hand-washing stations at homeless camps throughout the
city. “All Angelenos, regardless of their housing status, require
access to hygiene resources to prevent any further spread of the
virus,” Councilmember Monica Rodriguez said in a statement.
It’s a public-health measure activists have been asking the city
to take for over a year—and it’s still not enough, they
say.

“It’s unfortunate that it took a global crisis for our
leaders to pay attention to this, because it risks furthering
narratives that stigmatize and criminalize unhoused people,” says
Mike Dickerson, organizer with Ktown for All. “The need for
hygiene stations and bathrooms are year-round and not specific to
this outbreak. This new effort should focus on permanent changes
that make our neighborhoods healthier long-term, rather than
expensive temporary solutions.”

Theo Henderson, who lives in a park in LA’s Chinatown
neighborhood and hosts the podcast We the Unhoused, said
no hand-washing stations had been installed near him yet, although
there was a new soap dispenser in the park’s bathrooms, which he
could not access during nighttime hours. An informational sign
about Covid-19 had been posted to a door in the park, but it was
only in Chinese.

When it came to coronavirus, Henderson wasn’t worried about
being infected—“It’s not spread by people who are unhoused,
it’s spread by people with houses and passports,” he says—but
he was concerned about ongoing ignorance from housed people,
including city leaders, for the health-related challenges that
unhoused people face. He pointed to how a recent hepatitis A
outbreak that killed
20 people might have been prevented by building more service
centers—yet homeowners in many LA neighborhoods continue to

fight against shelters and service centers.

“When hepatitis is rippling through the community, it’s
because people don’t have restrooms,” he says. “But then they
get mad because people are going to the bathroom in the
street?”

On Sunday, despite pleas
to officials to cancel the Los Angeles Marathon over
coronavirus concerns, the race was held as scheduled. Under cool
blue skies, over 20,000 runners surged through the streets, not far
from the Chinatown park where Henderson lives. The 26.2-mile route
that slices horizontally through the city was punctuated by medical
stations, health officials, ambulances, tents, port-a-potties, and
hand-washing stations, including extra dispensers of hand
sanitizer. By the end of the day, it had all been trucked away.

Source: FS – All – Architecture 10
Coronavirus could be deadly for the U.S. homeless population. Are cities doing enough?