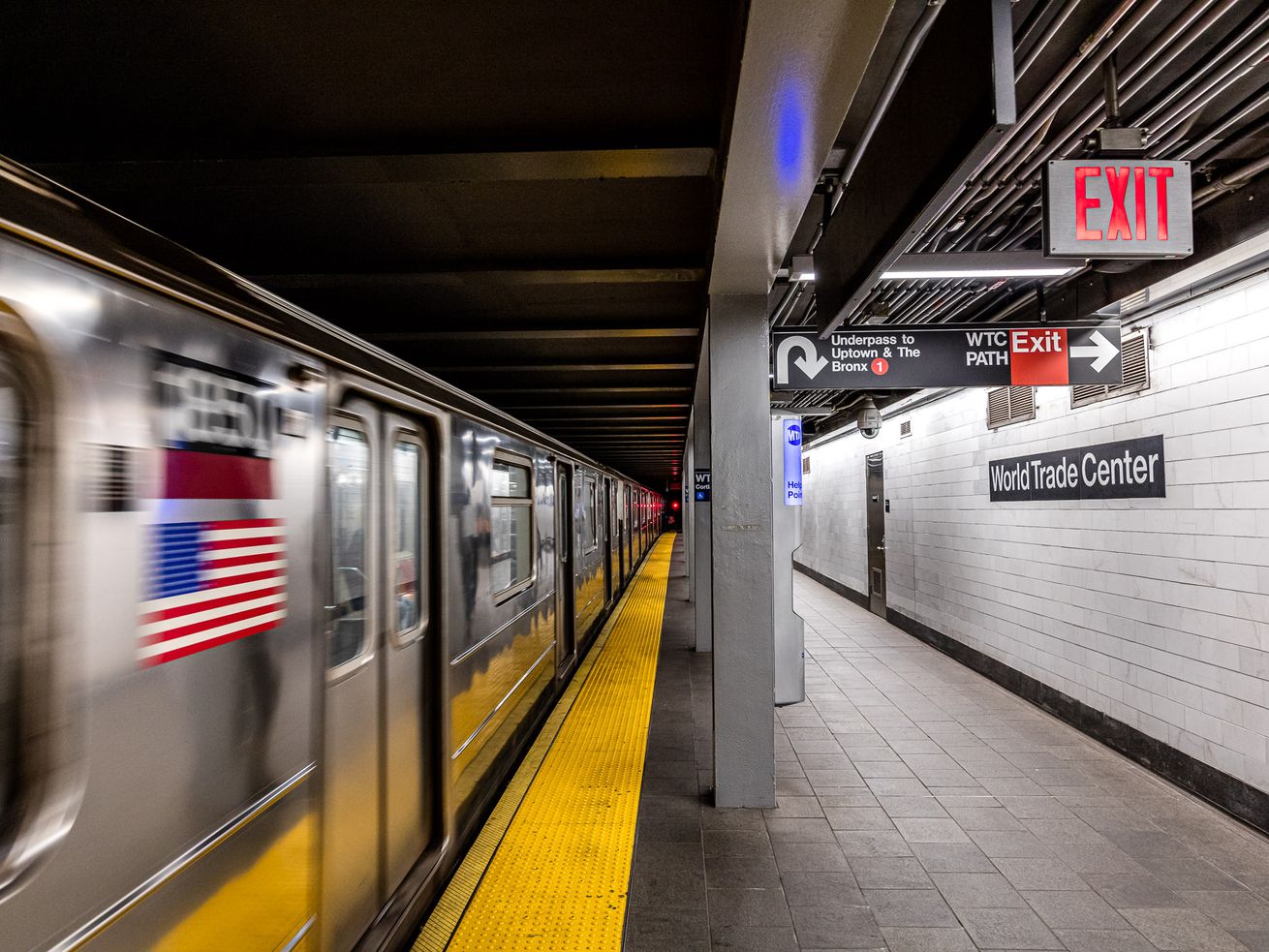 A new report from the Citizens Budget Commission ranks NYC as
the eighth most affordable large city, based on housing and
transportation costs

We know that New York City is in the midst of an
affordability crisis, and that
housing costs are
skyrocketing. But housing is only one piece of the puzzle when
it comes to affordability in cities, with other
factors—transportation, food prices, and other goods and
services—all factoring in. When all of that is taken together,
how does New York City compare to other cities?

A new study by the
Citizens Budget Commission, “Rent and Ride:
Affordability Is About Both,” sought to answer that question,
and found that—surprisingly!—New York City is the eighth most
affordable large city in the U.S., when you factor in housing and
transportation costs alongside the city’s median income.

The CBC focused on the 20 U.S. cities with the largest economies
(including places like Miami, San Francisco, Detroit, and
Washington, D.C.), and compared that to the percentage of income
residents spend on both housing and transportation. According to
its research, the high cost of housing and the relatively low cost
of transportation in NYC end up canceling each other out. Those
factors, along with the city’s median annual income of $69,211,
mean that New York households spend 45.3 percent of their income on
housing and transportation, which makes it the eighth
most-affordable among the 20 cities surveyed. 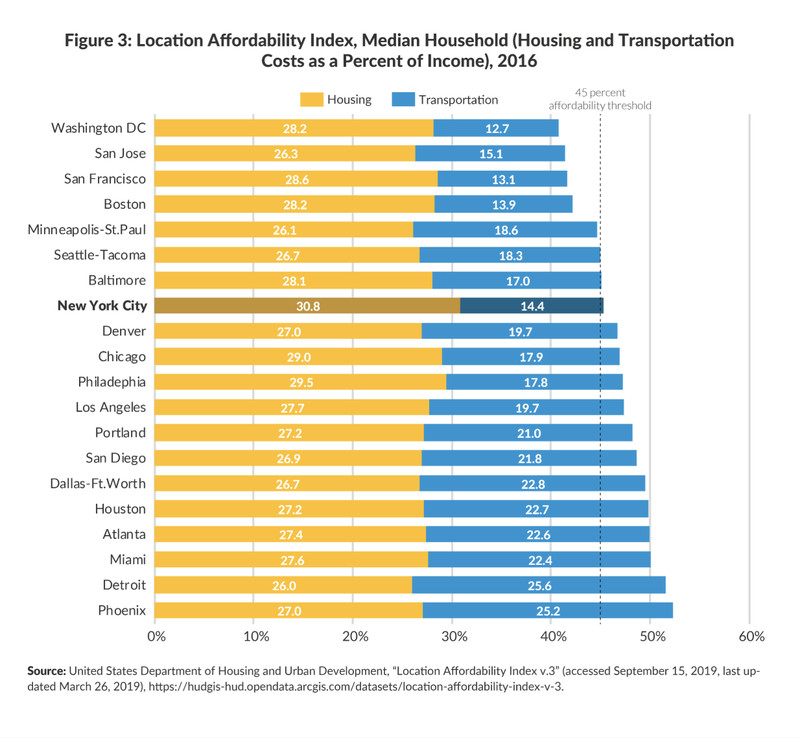 Courtesy
of Citizens Budget Commission (CBC). The top three most affordable
cities according to the CBC study are Washington D.C., San Jose,
and San Francisco, while the least affordable ones are Phoenix,
Detroit, and Miami.

The top three most affordable cities with housing and
transportation costs combined are Washington D.C., San Jose, and
San Francisco, while the least affordable ones are Phoenix,
Detroit, and Miami. This may seem surprising, but the report
explains that cities with robust public transit systems tend to be
more affordable (especially for low-income households),
transportation-wise, while cities where a car is necessary tend to
be less affordable.

But these results should be taken with a grain of salt, as New
York City still exceeds the affordability threshold. Per the
report, households that spend more than 30 percent of their incomes
on housing and more than 15 percent on transportation are
considered cost-burdened. Based on data from HUD, many New York
City households would still be considered cost-burdened; the
typical household spends $1,778/month, or 30.8 percent, of its
income on housing. (Housing costs are higher in San Jose,
Washington D.C., San Francisco, and Boston, but New Yorkers spend a
higher percentage of their median income per month). 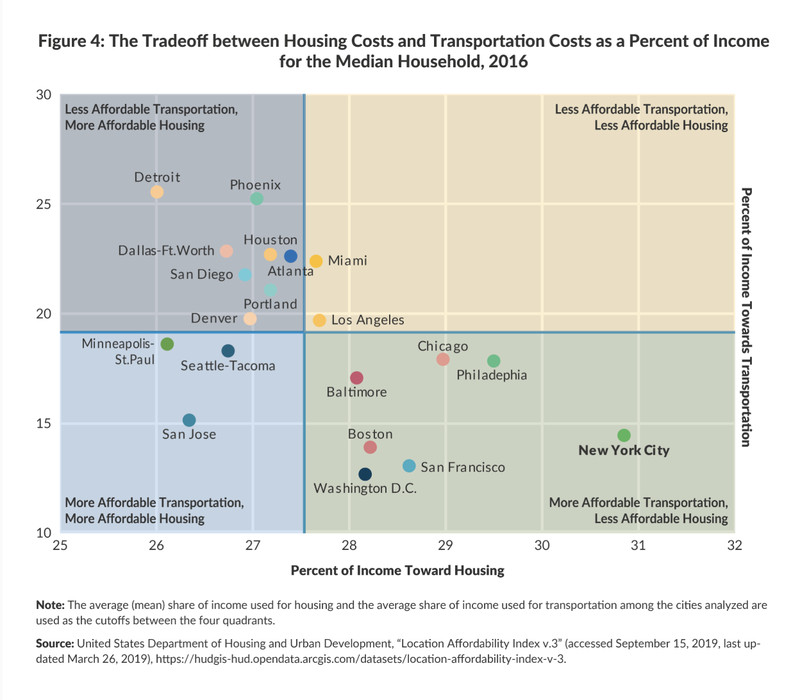 Plus, the city faces two big challenges to its so-called
“affordability competitiveness.” First, there’s the MTA’s

fiscal woes to repair its system, which the report says need to
be solved without increasing the cost of transportation for New
Yorkers. (According to a 2016
Community Service Society (CSS) study, one in four low-income
New Yorkers can’t afford MetroCards.) Second, as
demand for housing drives costs up, the city should address the
issue of housing supply and “alleviate
housing cost pressures.”

The report uses income data from the Department of Housing and
Urban Development (HUD) to compare New York to cities like Miami,
Detroit, Phoenix, Washington D.C., Boston, and San Francisco; the
figures included are based on what the study calls the “median
household” for each city, or one with two earners and two
children making the area’s median family household income.