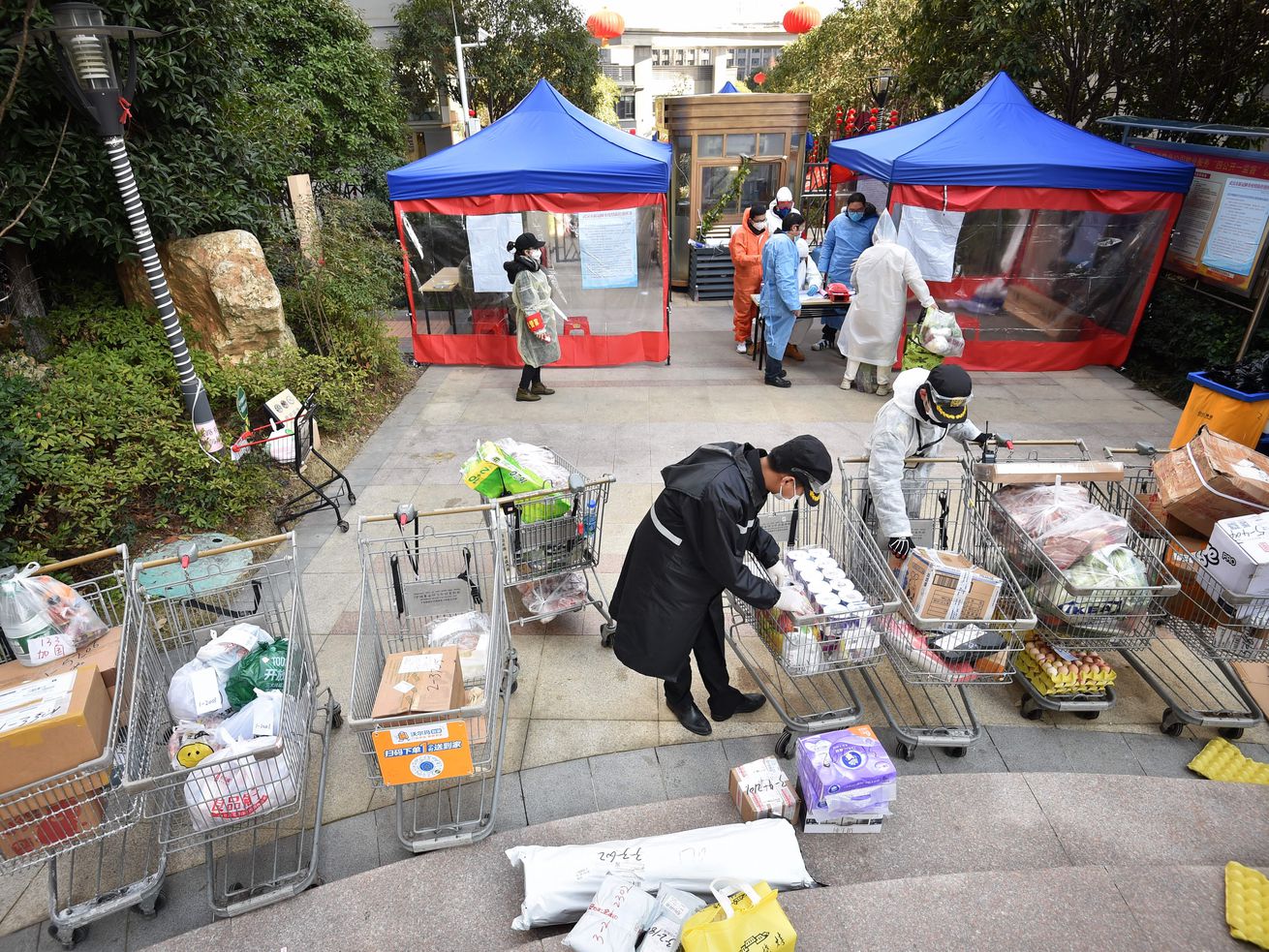 Even
in a time of quarantine, you can still be a good neighbor. |
Feature China/Barcroft Media via Getty Images

Starting last week, a disaster felt imminent, but it was
difficult to discern exactly what type of disaster it might be.
Hand sanitizer and bleach wipes were sold out on Amazon, implying
some kind of countrywide mass-cleaning spree. On the Los Angeles
subway, dozens of people wore the masks people wear to protect
themselves from wildfire smoke, except there was no fire—it was
the wrong time of year. In the pharmacy department at my local
Target, hardly any other types of medications were touched, but the
shelves that usually held cold and flu medicine looked as if
they’d been vaporized.

When asked last week about the perceived threat of
Covid-19, the novel coronavirus currently spreading across the
globe, the Centers for Disease Control’s head of immunization and
respiratory disease Dr. Nancy Messonnier relayed what she’d told
her children that morning: “While I didn’t think they were at
risk right now, we as a family ought to be preparing for
significant disruption to our lives.”

Quarantine. Isolation. What we’re preparing for sounds scary.
But after spending the past year preparing my own young children
for a major earthquake that’s
93 percent certain to strike in the next three decades, what I
know to be true is that preparing your home for disaster doesn’t
mean shutting yourself in—it means reaching out.

Whether or not this coronavirus ends up being declared a
pandemic, the disruption has already begun. Financial markets had
their worst week
since the 2008 financial crisis. Major public events have been

postponed or
canceled. Corporations have
issued travel restrictions. In China, where
private cars have been banned from entire cities and
families have been quarantined for up to a month, the economic
impact can be demonstrated by a
25 percent drop in carbon emissions and a
virtual elimination of air pollution in recent weeks.

On Friday, a series of U.S. events happened in quick succession.
Schools were closed across parts of
Oregon and
Washington. Dozens of cities, counties, and states
declared states of emergency. And then on Saturday, the

first U.S. death was announced—a man in a health care
facility in Seattle. By Monday, five more people from the same
facility had died,
bringing the U.S. coronavirus death toll to six.

In the face of a quickly advancing threat, Americans spent our
weekends
stocking our pantries. But what we should also be doing now is
opening our front doors to take stock of our communities.

Over a week of record-high temperatures and humidity during the
summer of 1995, Chicago’s medical facilities became overwhelmed
by people seeking treatment for heat-related illnesses. In the end,
one of the deadliest heat waves in Midwest history killed 739
Chicagoans. As city leaders struggled to understand why so many
people died, the epidemiology revealed some surprising findings, as
told in
Heat Wave: A Social Autopsy of Disaster in Chicago by Eric
Klinenberg, which has been adapted into the new PBS documentary
Cooked: Survival by Zip
Code.

While it would seem that most heat-related deaths would be
related to income and infrastructure—having access to a
well-insulated home with working air-conditioning, for example—it
was discovered that social
structures were just as important when determining who
survived. People who lived alone or who didn’t have contact with
people who lived nearby were more likely to die. Older women, even
ones who were considered to be more physically vulnerable, ended up
surviving at higher rates because of the nature of their
relationships with each other. Older men, who did not have the same
types of social connections, died at more than twice the rate of
older women.

What we should be doing now is opening our front doors to take
stock of our communities.

Even the CDC recommends
making a community coronavirus plan. But in the U.S., the
concept of “preparing” is seen not as making sacrifices for the
greater good, but rather as an endeavor that’s almost universally
individualistic. Just the looming threat of an emergency sets off
visions of a very specific chain of events where we double-park our
SUVs outside Costco, fight someone over the last pallet of toilet
paper, then lock ourselves in our basements with enough batteries
to keep our LED headlamps illuminated for a decade.

And while your home should absolutely have a stockpile of
nonperishable food items—FEMA recommends up
to two weeks’ worth, plus enough water and other
supplies ranging from medication to pet food to diapers—even
when the official health recommendation is quarantine, you will not
survive a disaster alone.

Data on the new coronavirus claims
80 percent of cases are mild, which is also true for most
disasters. Most people will not lose their lives in heat waves, or
lose their homes to flooding in a hurricane. The damage wrought by
disasters might seem indiscriminate, but communities that are
already the most marginalized—the
people who are already housing insecure or
experiencing long-term health issues—are most likely to be
severely impacted. They will need to rely on a society held
together by everyone else.

When I
interviewed seismologist Lucy Jones about her book
The Big Ones: How Natural Disasters Have Shaped Us (and What We Can
Do About Them), she wouldn’t tell me what to put in an
earthquake emergency kit. Because it’s not about what you have
stocked up in your garage—it’s about knowing what your
neighbors have in their garage, and who you can go to if your
garage is gone.

“What really matters is our communities,” she said. “Go to
your neighbors, go to your church, your school, and say, ‘How do
we work together?’”

My city offers a free disaster preparedness
workshop for neighborhoods conducted by emergency management
professionals. After completing the workshop last summer over a
potluck breakfast, we have an inventory of who on our block has
medical training, and who has critical supplies like a chainsaw or
a generator. But more importantly, just going through the process
brought our neighbors together in person so now we know which
households might need extra help after an emergency.

Quarantine complicates that, of course. If the order is to
self-isolate for a month, you may not be offering help in person.
But if your network is set up, smartphones and social media can
keep those social connections intact.

It doesn’t need to be frightening or stressful to prepare for
this. In the age of climate change, it’s a critical part of our
new reality. Whether it’s a potential public health threat like a
coronavirus outbreak, or an inevitable disaster like an earthquake,
strengthening our social support network is important for all kinds
of emergencies—and it’s the only way we’ll survive the
impending challenges of the climate crisis.

“To cope with these uncertainties, we have to turn preparation
for survival into the new normal,”
wrote my very smart friend Annalee Newitz, author of the book

Scatter, Adapt, and Remember: How Humans Will Survive a Mass
Extinction. “Instead of freaking ourselves out with
unimaginably dark scenarios, we need to plan for a difficult future
every day.”

Most of the things I did to get ready this past weekend
weren’t about me. I reached out to a few older neighbors to make
sure they had everything they needed (turns out they’re better
prepared than I am). I pestered a few people to
get flu shots. I made an emergency contact sheet with relevant
nearby resources. And yes, I added a few extra items to our weekly
shopping list—not
masks—and had them delivered using our local grocery
store’s delivery service. Nothing was unavailable or sold
out—and I didn’t have to fight anyone for toilet paper.

Now that the disruption of daily life is certain for much of the
country, you can make a plan with your employer for
how you can work from home. Talk with another family on your
block to compare child care strategies if
schools end up being closed. Set up a group text with your
neighbors now so you can see if one of them has something you might
need later instead of putting undue stress on delivery
workers—who will be facing the same issues as you are, but may
not get paid if they can’t work.

Who will you be checking in on? Who will check in on you?

There are a lot of things you could do today to
help alleviate the burden on your immediate community. But as
far as advice goes, this is really the best I’ve come across:

Eat one when you’re sick.

Drop the other off outside your neighbor’s door when they’re
sick.

Instead of hiding in a crawlspace and stacking towers of canned
vegetables around you to somehow ward off the inevitable, find a
can opener, open up that cream of mushroom soup, and use it in your
favorite casserole recipe to provide essential nourishment to the
people around you who might need it, when they’ll need it
most.

And before, during, and after you make the casserole, you should

wash your hands, and do it right. It’s the best way to
protect yourself and others.

Source: FS – All – Architecture 10
In a disaster that calls for isolation, your community will help you survive

How buying a house activated all of my anxieties