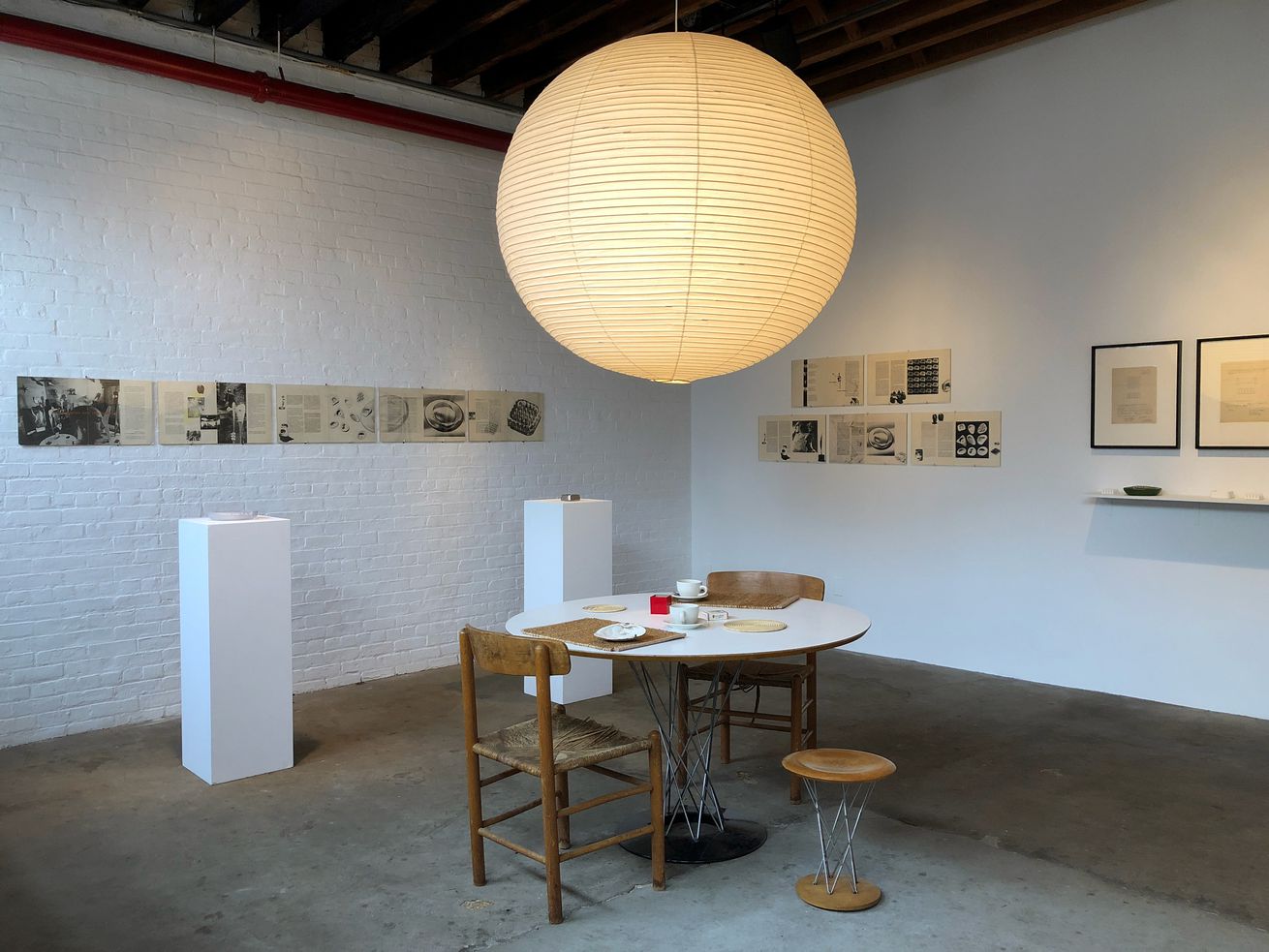 In the 1950s, smoking was still considered
glamorous, and ashtrays were mainstays inside
American homes and universal accessories on tabletops. In some
ways, ashtrays are also a perfect design object—aside from the
unhealthy habits associated with them, of course—as they’re
small-scale manifestos of the people who created them. And for
midcentury sculptor and designer Isamu Noguchi, an ashtray was a
possible big break.

“He wanted to get rich by making ‘this silly little
trinket,’ as he called it,” says Dakin Hart, curator of

The Sculptor and the Ashtray, a new exhibition at the Noguchi
Museum, in New York City, on view through August 23. 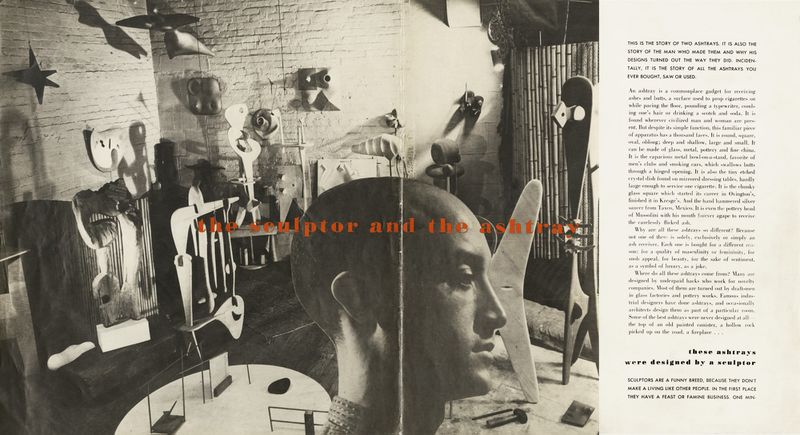 Courtesy
the Noguchi Museum A never-published magazine article from the
1940s details how Noguchi translated his ideas about sculpture into
domestic objects.

Before Noguchi found success with his paper
Akari lanterns, before his coffee table became
an icon of midcentury design, and before his
monumental parks and
playscapes became beloved public spaces, he was a struggling
artist trying to make ends meet while doggedly pursuing his true
life’s work: redefining what sculpture is and exploring how it
can mediate the relationships people have with the world around
them. To Noguchi, all environments could be considered
sculpture.

Noguchi took a rigorous approach to his work, whether it was

set designs for Martha Graham or
conceptual landscapes, and was deeply obsessed with the craft
and technology of fabrication.
His work on ashtrays—humble objects familiar to and used by
many—presents an accessible and relatable avenue to understand
his worldview.

“We are really trying hard not to celebrate smoking,” Hart
quipped during a walkthrough of the exhibition. “What we’re
doing is celebrating Noguchi’s incredibly expansive idea of what
sculpture was, which, at the time, was revolutionary and very
different. Noguchi really wanted to cover the full spectrum of
sculpture affecting life, and we have the most quotidian end of the
spectrum with the ashtray.” 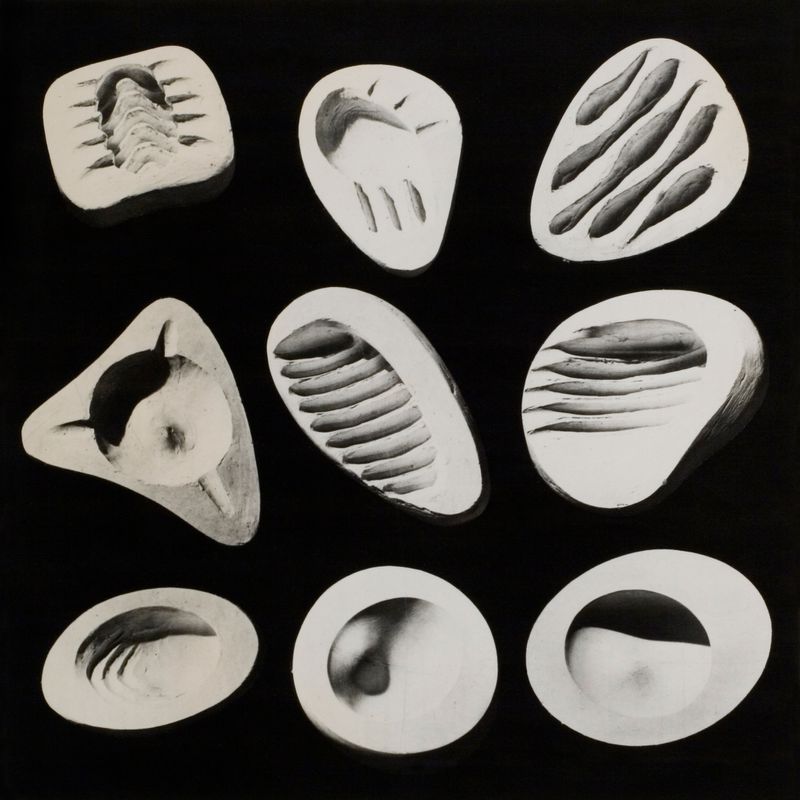 Courtesy
the Noguchi Museum Noguchi explored different biomorphic forms for
one of his ashtray designs. This photograph shows how he progressed
to the final shape, located in the bottom right corner.

Like much of Noguchi’s work, the two ashtrays he designed—a
biomorphic glass bowl and an industrial-looking metal
version—were never produced. Curators at the Noguchi Museum
discovered the designs while digitizing the artist’s vast
personal archive for publication to a publicly accessible
website in November 2019. They came across research for the
designs, photography of prototypes, personal correspondence in
which Noguchi talked about the project, and patent drawings. But
the real find was an unpublished
magazine article from about 1944 explaining his creative
approach: “Sculpture is no good if it’s just put into a
gallery,” he said in the story. “It must be
part of daily living.”

“[Noguchi’s] interest was in shaping civic life,” Hart
says. “That’s what he was really inspired by, and he saw
sculpture as a tool for how to do that. … Even though he demeaned
[the ashtray] with the phrase of ‘silly little trinket,’ he was
thinking about how to shape the ritual of togetherness through the
ashtray. It’s a modern hearth.” 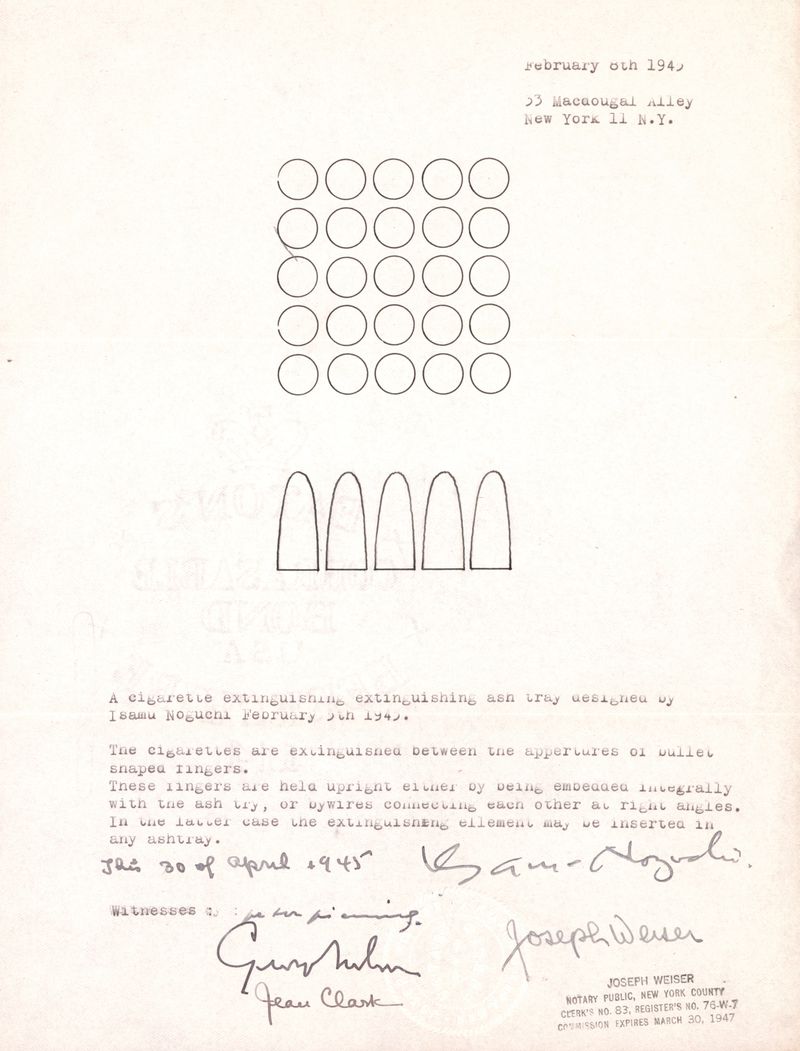 Courtesy
the Noguchi Museum Noguchi filed a patent for his ashtray design,
which was to feature raised bullet-shaped pegs upon which lit
cigarettes could rest and could be used extinguish butts.

Noguchi began his ashtray project by questioning what a really
good one would be in terms of shape, materials, and use. He started
with the requirements first: big enough to hold lots of cigarette
butts, enough space to rest multiple cigarettes without them
rolling off, something to extinguish the cigarettes, and a design
that looked good—then began exploring forms that would meet the
criteria. He ended up with an asymmetric, shallow hand-blown glass
bowl with a small lip around the edge.

“Then Noguchi basically called it garbage because, he said, in
the end it just sort of looks like every other ashtray, and he was
displeased by that,” Hart explains. “So he sort of flipped and
decided to go completely the other way and produce something
that’s much more industrial. As he said: If you don’t take
advantage of America’s capacity for mass manufacture and
industrial manufacturing, you’re missing the trick.”

The second “perfect” ashtray Noguchi designed was
square-shaped and made from metal. It came in two parts: a holder
and a removable bottom with raised pegs that looked like bullets.
Smokers could rest their cigarettes on top of the pegs and when
they were done, they could stick them vertically between the pegs
to extinguish them, or tamp them on the top of the pegs. 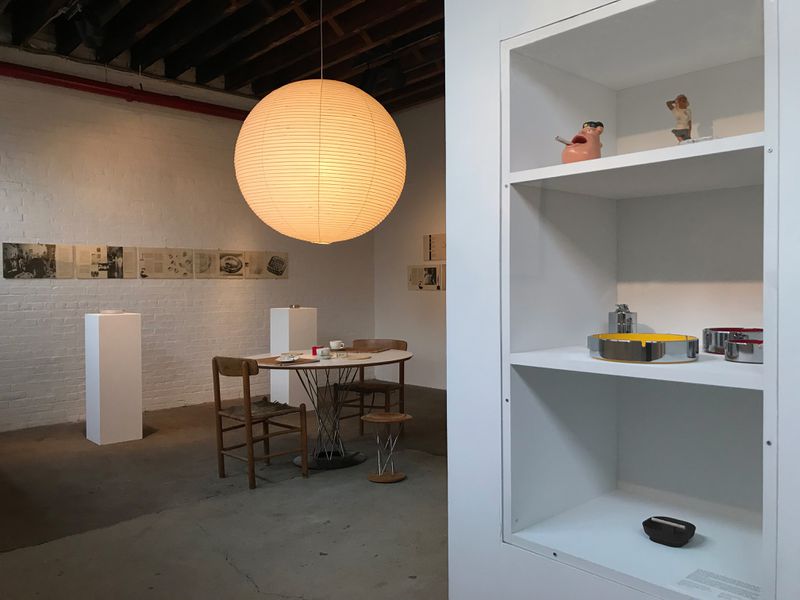 For
the exhibition, the museum recreated a table setting from the
sculptor’s studio, which included two ashtrays he regularly used.

“He wrote to Buckminster Fuller asking if he could have
permission to call it the ‘dymaxion ashtray,’ which is so
totally wonderful and goofy,” Hart says. “The concept of
dymaxion was all about dynamic efficiencies and he felt like he had
nailed it with this ashtray.”

Noguchi tried for several years to get a manufacturer to produce
his ideas, but never found one. Even though he designed his ashtray
specifically for industrial production, manufacturers thought it
was too complex to make.

“The irony is—and this is sort of an ongoing story of
Noguchi—that he designs something for mass manufacture, but he
wasn’t willing to do what it would take to make it mass
manufacturable,” Hart says. “He would have had to simplify it
in ways that he didn’t want to. He ran up against the fact that
he hadn’t made efficiently producible designs, even if the work
was the most efficient-to-use design imaginable [to him].”

Before this exhibition, Noguchi’s ashtray ideas lived only on
paper. The sculptor’s archive only included photographs and
drawings of the ashtrays he made and the museum decided to
fabricate models based on them so visitors to the museum could see
a realized version of the designs.

“Between these two ashtrays, you get this incredible view of
the sort of bipolar universe in his mind of the natural and
handcrafted, and the industrially produced and manufactured, the
technical and the more intuitive,” Hart says. “Noguchi
absolutely is in the synthesis of those two things. Those two
states, those two ways of thinking.” 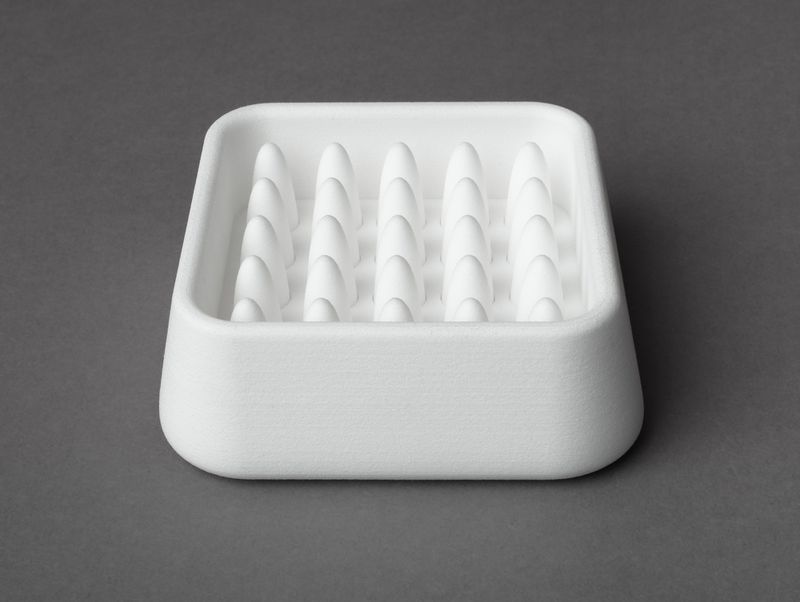 But what did the sculptor himself use to ash? A simple clamshell
he likely found on a Long Island beach and the Cubo tray from
Italian designer Bruno Munari, both of which appear in archival
photographs of Noguchi in his Long Island City studio.

“I think [Munari’s design] outdoes Noguchi’s—if his [had
ever been] produced,” Hart says, holding up the simple red,
plastic cube with a metal insert that slides out to discard ashes.
“This is actually an incredibly simple and efficient design for
cleaning. And it’s still produced today.”