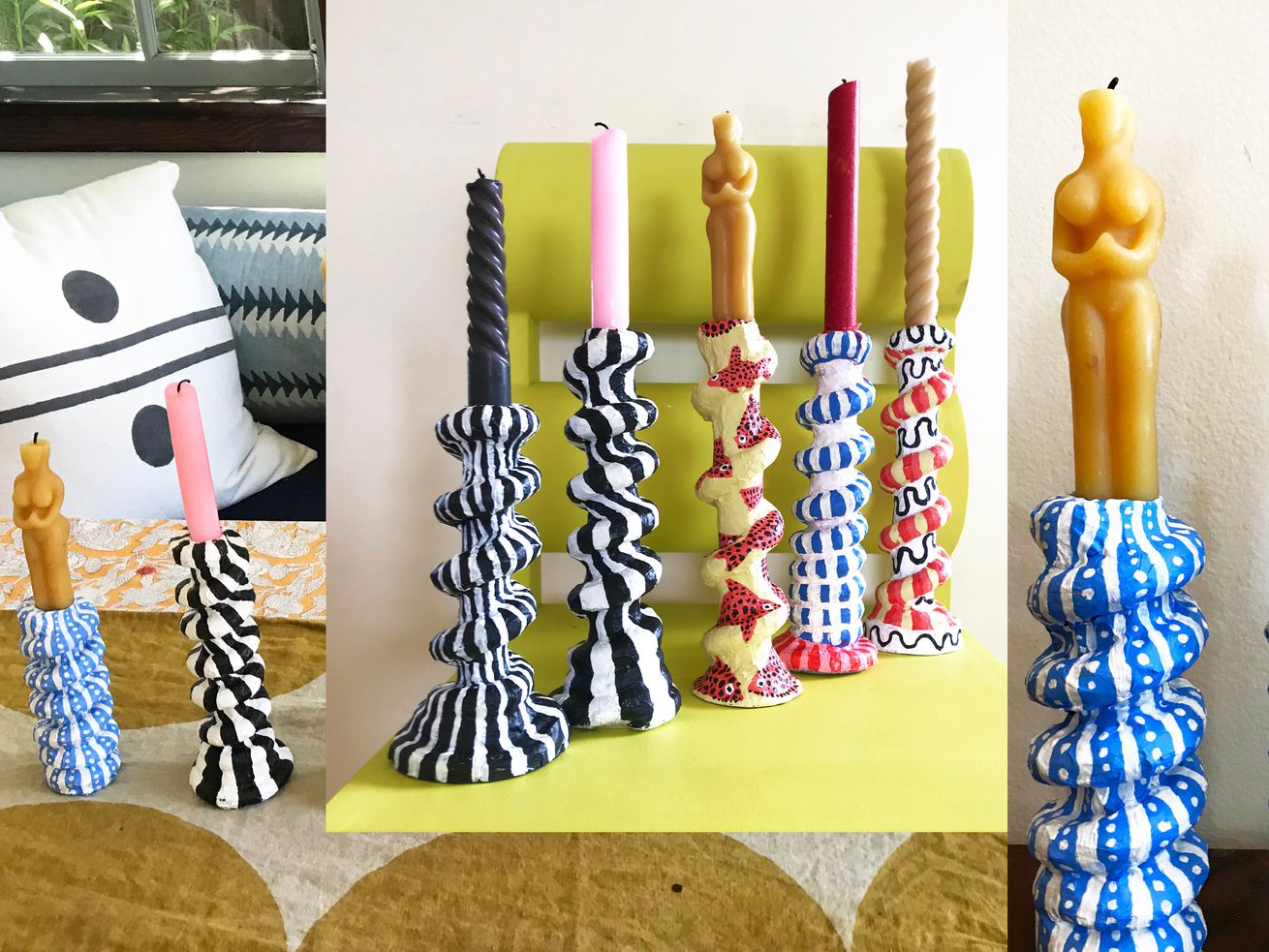 Your inner third grader will love this design trend

Hopie Stockman, co-founder of Block Shop Textiles, is
eating at her dining table more often these days, like many of us
are doing under stay-at-home orders. She quickly grew bored of
looking at the same table setting but didn’t want to order
nonessential items like candlesticks. So she decided to make her
own.

She began by wrapping
old rope around a paper tube, then sculpted everything into
place with papier-mâché, and painted the candlesticks with
optical patterns and punchy colors. The spiral shape riffs on the
Italian design guru Ettore
Sottsass’s whimsical totems and the turned-wood legs of a
table she was admiring on Chairish. Stockman showed them to her
sister, who suggested she share them with their audience as a

“We’re trying to find the humor where we can, and
papier-mâché feels silly,” Stockman says. “It’s not about
putting pressure on ourselves to be productive, but hopefully using
this time to be a little more exploratory.”

doppelgängers for Zoom calls and
papier-mâché coronavirus piñatas for “cathartic
destruction.” Artists who can’t access their normal supplies
are
turning to papier-mâché, and contemporary designers who have
always worked with the medium are pushing it even further.

While papier-mâché is French for “chewed paper,” the
material’s history dates back to ancient China. Paper, as we know
it today, was invented during the Han dynasty—about 206 BC to 220
AD—and some of the earliest known three-dimensional objects made
from paper also
come from this era. During the 18th and 19th centuries,
papier-mâché became popular in Europe. Designers molded it into
elaborate and ornate furniture, like this ca.
1844 chair in the Cooper Hewitt’s collection inlaid with
mother-of-pearl and gold leaf. The material also has a long history
in folk art, including Mexico’s cartonería
sculptures, and outsider art. Twentieth-century heavyweights—like
Claes
Oldenburg, Eva
Hesse, and
Franz West—all used the medium.

The long history of paper art has always appealed to Hannah Bigeleisen, a Brooklyn-based
artist and designer who became obsessed with using paper to create
3-D objects while studying sculpture at the Cleveland Institute of
Art.

“The material properties [of paper] are amazing,” Bigeleisen
says. “It’s halfway between a sculptural form and a textile.
Paper also has a beautiful history: It’s the site of
investigation, learning, and drawing.” 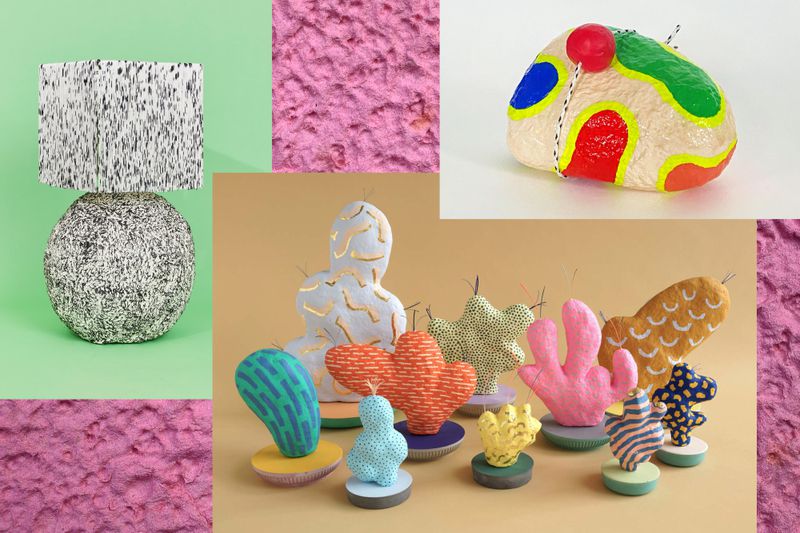 Bigeleisen launched a new
collection of papier-mâché lamps at Sight Unseen’s virtual
Offsite fair this month. The Archi lamps are composed of geometric
bases molded from cotton pulp and plaster, a mixture that yields a
bumpy surface not unlike a popcorn ceiling. The shade is made from
wispy marbled fringe designed by the New Orleans–based artist
Jami Girouard.

“Those irregularities and dimples give the light a rich
surface to cast itself on,” Bigeleisen says, pointing out that
the strangeness of the surface makes your eye linger. “The form
becomes fluid.”

Adam Frezza and Terri
Chiao, the artists behind the studio Chiaozza, are known for
their surreal and psychedelic sculptures like cartoonish
plants and imaginary geological
formations. They use papier-mâché heavily these days. Their
creative relationship with the material began in 2012 when they
were drowning in an endless flood of junk mail: They carefully
removed all the staples and plastic windows from their mail and
began turning it into pulp for papier-mâché. Now they source
paper scrap from local photography studios, pulverize it in an
industrial immersion blender, and mix it with wood glue.

“Almost everything we use in our practice is a bit of a
utilitarian reaction to what is readily and easily available
weighed with the toxic impact those materials might have on us over
time,” Frezza and Chiao write. “We try to use things we can
source easily, manipulate with hand tools, and achieve a finished
product without too much of a negative impact on the
environment.”

Frezza, Chiao, and their young daughter, Tove, are quarantining
in Vermont, away from their Brooklyn studio. But they’re still
collecting paper and cardboard waste and making papier-mâché.
“It is nice to revisit the early methods we used for making pulp
and to recognize how far we have come with paper so far,” they
tell Curbed. “It feels like the kind of material one could spend
a lifetime with.”

The pandemic led Kaye
Blegvad, a designer and
illustrator based in Brooklyn, to integrate papier-mâché into
her artistic practice. Blegvad normally makes jewelry, prints, and
ceramics, but the stay-at-home orders have prevented her from going
into her studio. She also had a bad case of artist’s block, which
was amplified by the crisis. Enter papier-mâché, a material that
wasn’t precious and that was fast and easy to get into.

“I thought to myself, I’m going to mush some stuff together
and see what happens,” she says. 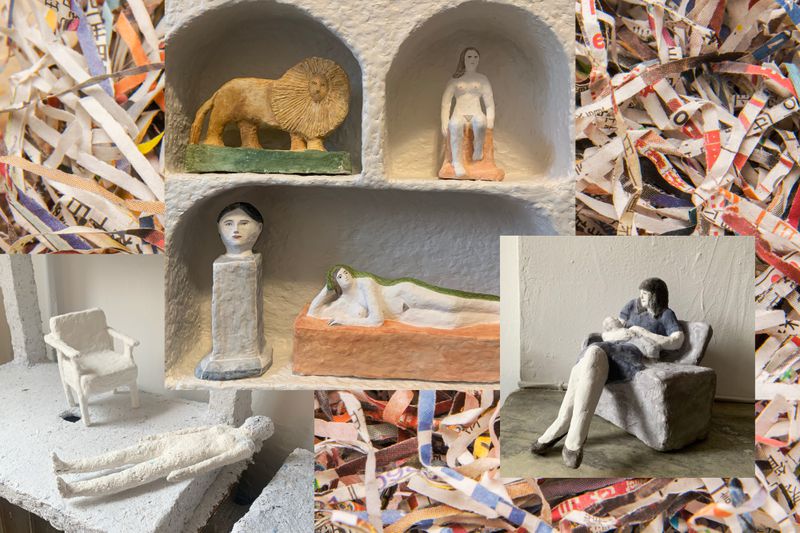 Kaye
Blegvad What started as a personal project making folk-art inspired
figurines from papier-mâché turned into a new obsession for Kaye
Blegvad, a jewelry designer and illustrator based in Brooklyn. She
eventually needed to make a papier-mâché to store her
pieces.

Blegvad’s papier-mâché foray started with figurines based on
old photographs of folk-art statues. “It unglued something and
made me think of other things I can make,” she says. She sculpted
a miniature
version of an armchair that her cat loves to sit on. She made
a piece based on
a photograph of her grandmother holding her father as an
infant. She’s done reclining nudes and
surreal
flowers, among other things. The figurines rapidly took over
her apartment, which doesn’t have much storage, so she made a
papier-mâché
shelf to hold some of them.

“It made me feel more able to make things and think creatively
again in a way that feels energizing … and has contributed to my
threadbare grip on sanity.”

Stockman posted her candlesticks tutorial to Instagram as a way
of offering people that therapeutic outlet.

“This is a really challenging and alienating time for
people,” Stockman says. “We’re all facing different
challenges, and we’re suffering in different ways. One thing we
could do is roll up our sleeves, get our hands dirty, go back to
the days of art class, and do something fun for the hell of
it.”

When I first saw an image of the finished candlesticks, I
immediately wanted them. When I learned they were a craft project,
I had to try it for myself. I didn’t have art paste like the kind
Stockman used, so I mixed up flour and water like I did when I was
a kid, cut up a few pages from a pile of old New Yorkers, and got
working. (You might be wondering about the safety of candlesticks
made out of a highly flammable material like paper; Stockman says
use your best judgment and remove a candle if it has burned too
low.)

Like Stockman, I got lost in the slow and repetitive process of
soaking paper strips, draping them on the candlesticks’
structure, building up the form, and smoothing out the crinkles.
The candlesticks are far from perfect—lumpy, lots of edges that
make it pretty obvious that they’re paper pieces—but they’re
so satisfying. After spending all day staring at my flat computer
screen, working on something so slimy and messy felt freeing and
refreshingly tactile. And unlike the story I was writing earlier in
the day, this project wouldn’t be scrutinized by outside
eyes.

I’m currently thinking about what I can make next: An entire
candelabra? A funky plant? A table lamp? By the end of quarantine,
I just might wind up with a shelf like Blegvad’s.

Sea Ranch-Esque Compound Comes With Its Own Funicular