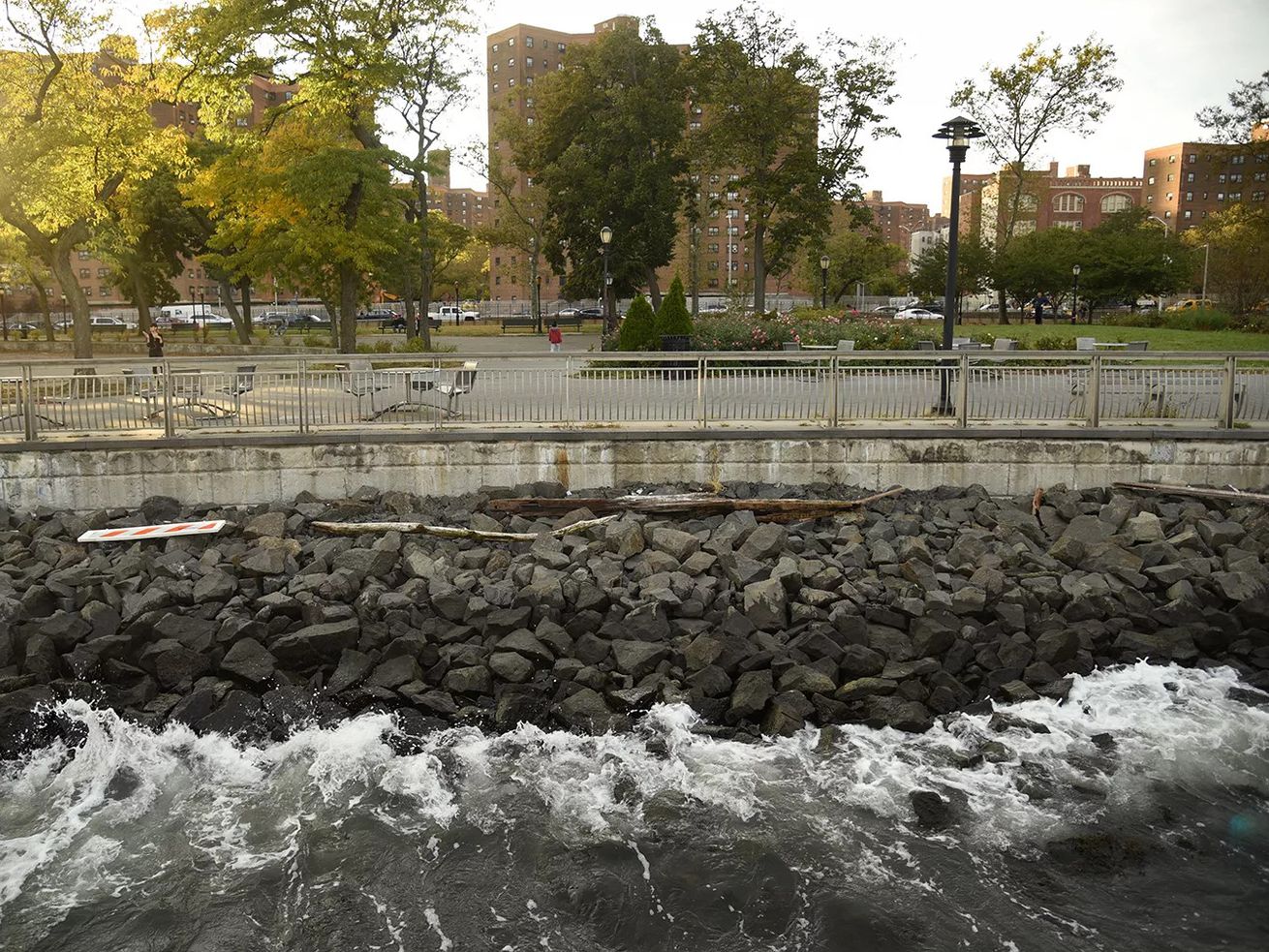 East
River Park in the Lower East Side section of Manhattan. | Nathan Kensinger

A transformational plan to fill in and raise East River Park by
eight feet is facing a legal battle that threatens to stall flood
protections for Manhattan’s east side.

A coalition of community groups have filed a lawsuit in
Manhattan Supreme Court against the City of New York, arguing that
officials must obtain the state legislature’s approval for the
$1.45 billion East Side Coastal Resiliency Project before the
five-year plan can move forward. The suit calls on a judge to annul

the City Council’s November approval of the plan, and require
the state senate and assembly to sign-off on plans for East River
Park before any work, which is scheduled to break ground in March,
can get underway.

It’s a bittersweet move for park advocates, who say they want
flood protections for the vulnerable area but point to a laundry
list of concerns about the project, including an abrupt change that
requires the East River Park to be razed and rebuilt.

“We didn’t want it to come to this,” says Fannie Ip, a
member of East River Park Action, which is spearheading the
lawsuit. “This [project] is once in a lifetime. Once this goes up
we can’t simply change it. We’re a model for the rest of the
city, so do we really want to make a mistake? We have to do this
correctly.”

The lawsuit charges that the city must seek “parkland
alienation” from the state legislature in the form of a bill
that would allow East River Park to temporarily become a
construction zone. It’s a common practice when transferring
public parkland to a private entity, but can also be used when a
municipality wants to temporarily repurpose park space. Without
this step, the city’s entire plan is dead in the water, argues
attorney Arthur Schwartz, who
temporarily stalled the 14th Street busway with multiple legal
challenges.

“It’s a super flawed plan because the City Council defied a
concept that has existed in the law for time immoral, but certainly
it’s been codified in New York for about 100 years,” says
Schwartz.

The original project sought to build a flood wall on the
park’s western edge, adjacent to the FDR Drive, in an arrangement
that would have kept the green space intact while allowing it to
flood and partially act as a sponge during major storms.

Under the new City Council-backed vision, that protective wall
is slated to move closer to the water by raising East River Park
and the waterfront’s edge by about eight feet to stave off rising
sea levels and powerful storm surges intensified by climate change.
But that overhaul spurred
community outrage,
months of protests, and
a deep mistrust of the de Blasio administration’s
efforts.

The change would have initially shuttered the park for about
three years, but the city later implemented another significant
change:
switching to a phased approach that will allow almost half of
the park to remain open throughout construction. But critics argue
that the project will still starve Lower East Siders of green
space, and has left locals with too many questions to be worth
pursuing. There
are also questions over whether the pricey plan will truly
provide longterm protections.

“Protecting the contiguous community from storm surges and
flooding is a worthy endeavor, but shutting down more than half the
Park to do so would greatly interfere with its use as a public park
and would require approval,” read the lawsuit, which has more
than 80 plaintiffs and was filed on February 6.

To remake most of the 57-acre park, the city will have to uproot
nearly 1,000 trees and displace some wildlife deemed at risk by the
state. But the new resilient version of the park will include more
than 1,800 new trees across 50 species planted above the floodplain
for a net increase of 750 trees.

The lawmakers who represent the overall 2.4-mile project
area—City Councilmembers Carlina Rivera, Keith Powers, and
Margaret Chin—expressed reservations about the plan throughout
the land use review process but ultimately negotiated changes and
commitments from the city they believe meet the needs of the
community.

“We fought for and won dozens of commitments that local
stakeholders asked for, including keeping large portions of East
River Park open throughout construction and the enhancement of
additional open spaces throughout our communities,” the lawmakers
said in a joint statement to Curbed. “With the growing threat of
climate change, we cannot afford to wait on much-needed waterfront
protections.”

The Council’s legal team reviewed whether parkland alienation
was required during the land use process and agreed with the city
law department’s assessment that it is not needed for the East
Side Coastal Resiliency project. The city stands by its review,
says City Hall spokesperson Julia Arredondo.

“This important project will protect 110,000 New Yorkers and
East River Park from the possibly deadly effects of sea level rise
and severe storms,” Arredondo said in a statement. “We have not
seen the lawsuit, but we will vigorously defend any threat to our
ability to keep New Yorkers safe.”

Apartments for rent in Sunnyvale: What will $2,200 get you?

Raiders’ Josh Jacobs, who as a youngster slept with his dad in a car, buys his father a house

Moms 4 Housing timeline: How and when the saga unfolded