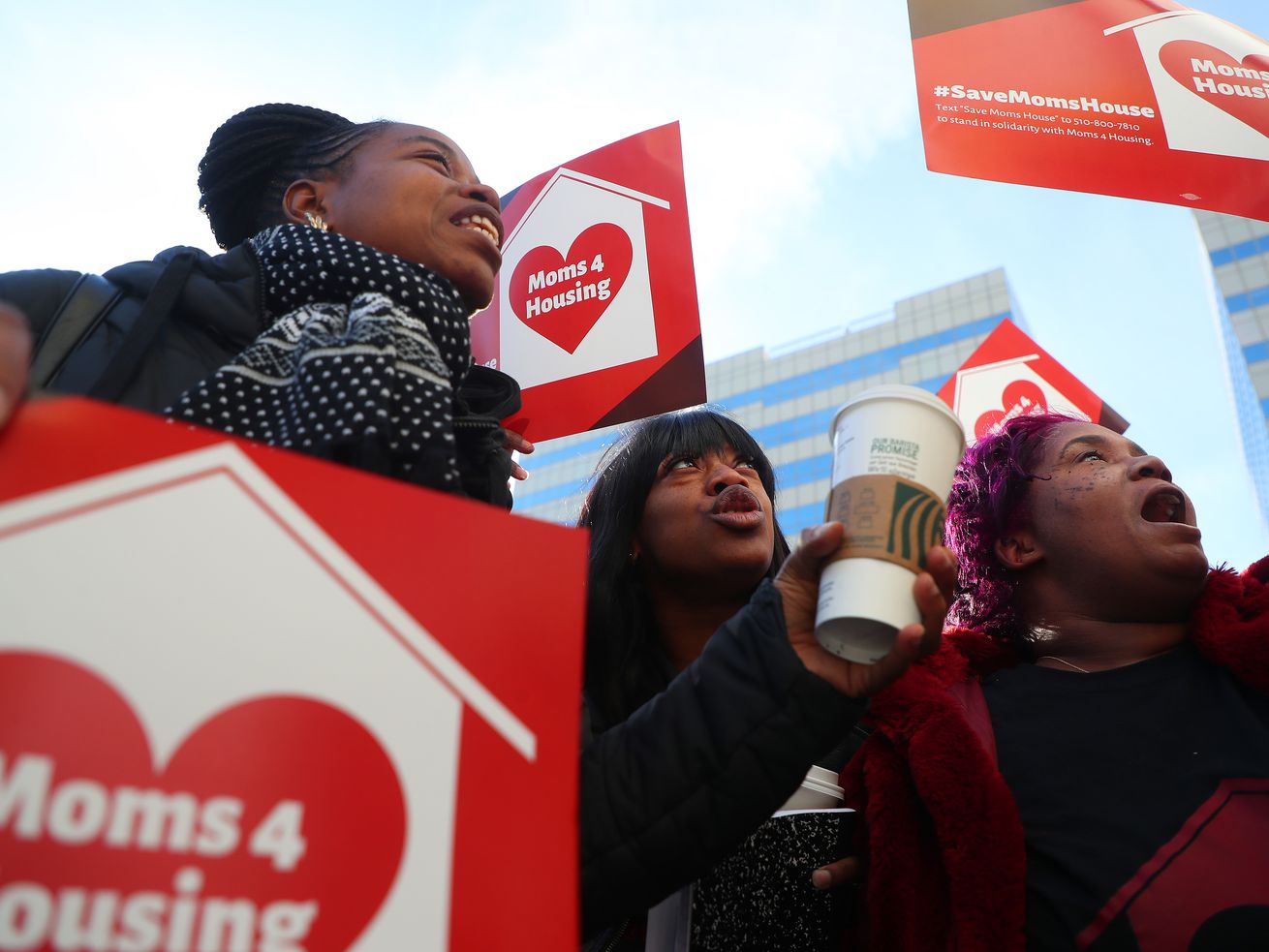 Rent strikes, home occupations, how the pandemic underscores the
need to fight for housing justice.

For Martha Escudero, a 42-year-old caregiver living in Los
Angeles, the debates around housing today come down to a simple
question of fairness. Her father, an immigrant from Mexico, only
has an elementary-school education and works as a janitor, and was
still able to buy a home for his family when his children were
growing up. Born and raised in the U.S., Escudero has a college
degree, speaks English, has a job in the medical field, and can’t
even afford to rent a house in the Boyle Heights neighborhood for
herself and her daughters, Victoria, 10, and Meztli, 8.

“Things aren’t right, and we need to do things to make it
right,” she says.

That’s one of the reasons why Escudero took action and joined
the Reclaimers, a
group of homeless and housing-insecure moms and housing activists
in Los Angeles. Earlier this month, they
took over homes owned by Caltrans, the state transportation
authority, arguing they shouldn’t be left vacant during a
pandemic when people need places to live. The homes, located in the
El Sereno neighborhood near Pasadena, were purchased decades ago to
make way for an extension of the 710 freeway that was never built,
and roughly
163 are still standing and vacant.

Escudero is now living with her daughters in one of 13 homes
occupied by the movement, a blue two-bedroom bungalow where
they’ve already planted gardens in the front and the back to grow
herbs, tomatoes, and corn. Volunteers with the group, a coalition
of local housing-justice organizations, work around the clock
providing security for the Reclaimers. Escudero says her daughters
are “extremely excited” to have a home after years of bouncing
between temporary living situations with friends, and have
nicknamed the vegetables growing outside the “garden of love and
kindness.”

Not everyone is happy about her new home, however. “I keep
hearing, ‘Why don’t you wait like everybody else?’”
Escudero says. In other words, why don’t you get housing
assistance instead of occupying a home? “Well there are families
in shelters who have been waiting four years,” she says. “What
a lot of people aren’t aware of is there are lots of vacant homes
owned by cities, counties, and school districts, and they belong to
us. The government has been hoarding these homes. Housing is a
human right and shouldn’t be commodified by investors. The
government just isn’t working fast enough.”

Escudero and others point to
Moms 4 Housing, the group of Oakland-area activists who staged
their own takeover of a vacant home beginning last November—in
their case owned by Wedgewood Properties, a national firm focused
on home flipping—as a big inspiration for their actions.

The burgeoning housing-justice movement already had plenty of
momentum to fight against what it sees as rampant inequality and
unaffordability. Now, the coronavirus crisis has exacerbated
everything, and activists across the country see this as a crucial
moment to push the housing-justice platform. The nation is facing
an unprecedented economic crisis, one that will
make it hard for millions to pay rent, underscores
risks to the homeless population, and highlights what they see
as an unjust and unfair housing system based on speculation. The
simple fact is, if you don’t have a house to stay home in, you
can’t do your part to fight coronavirus.

Politicians ready trillions to bailout the
rich, Trump pushes for a return to work as the number of
#coronavirus infections explode + on April 1st – the rent is
due. Here’s our guide on what you need to know about the upcoming

“I think some people in Washington aren’t considering the
impact this crisis will have on people on the ground,” says Peter
Gowan, policy associate for the Democracy Collaborative, a
progressive nonprofit. “There’s a lot of talk about bailing out
big companies, and making sure people stay employed and on
unemployment benefits. But so many people are going to fall through
the cracks. It’s very possible these funds run out before the
economy is fully recovered.”

Escudero and others in the Reclaimers movement say they’ll
stay in the houses as long as they can, and believe their actions
only prove that if the government has the will to work fast, it can
provide permanent housing for everybody, especially during a
pandemic. Matt Rocco, a Caltrans spokesperson, says the department
is aware of the situation, “and Caltrans is currently in
discussions regarding the use of these properties.”

El Sereno may soon be seen as one of many fronts in a growing,
nationwide push for housing rights and housing justice, as calls
for collective action grow and #RentStrike and #CancelRent trend on
social media. Carroll Fife, a long-time Bay Area activist and
regional director of Alliance of Californians for Community, who
helped the members of Moms 4 Housing organize and strategize, says
to “stay tuned.” She says there are plans to get the Moms and
Reclaimers together to meet, and she’s fielding phone calls from
across the country from people asking for advice on how to reclaim
homes.

Groups across the country are rapidly mobilizing, pushing for
emergency legislation and support and
organizing tenant rent strikes across the nation. This morning,
housing activists and advocacy groups from across the country will
get together for a tele-townhall to advocate for legislation to
push a #CancelRent agenda, which includes a moratorium on work
requirements for housing and housing for the unhoused, featuring
comments from progressive Democratic Reps. Jesús “Chuy”
García and Rashida Tlaib. In the Bronx in New York City at 6 p.m.,
organizers with groups including the Justice Center en el Barrio
will ask tenants to start banging on pots and pans and chant
“Cancel the Rent” and “Cancela la Renta,” part of a broader
campaign asking for a 90-day rent cancellation.

“There are going to be a wave of several different types of
actions to address the housing crisis, which is now a health
crisis,” Fife says. “We’re preparing a toolkit for people who
can’t pay their rent, so they can learn what their rights are and
how to weather the storm.”

Gowan says that activists around the country are discussing the
tactics used by Moms 4 Housing and the Reclaimers.

“People will be looking to organize people in encampments of
unhoused people,” he says. “Lots of people are talking about
forming tenant unions in their buildings.”

This push to make housing a human right has a number of concrete
policy goals, according to Fife. The first is establishing a right
for housing, which would then legally compel the government to
provide housing for the unhoused population. She also wants to see
more funding for community land trusts, which would help promote
community ownership and take units off the speculative housing
market. She’s hoping that California can allocate more state and
local funding for these organizations. Fife points to bills in the
California Assembly, such as State Sen. Nancy Skinner’s proposal
around vacant housing, which would fine corporations that own
multiple single-family homes if they keep houses vacant for more
than 90 days, and give local governments first rights to use such
vacant properties for affordable housing.

On the national level, organizers are pushing for the
Homes Guarantee, a legislative platform introduced last fall
and backed by a nationwide coalition of local housing justice
organizations. That plan, which would invest billions of dollars in
housing infrastructure and radically reshape the way the housing
market works, would be funded in part by both a $1 trillion
investment in the Housing Trust Fund and a $1 trillion bond
offering. Sen. Bernie Sanders has endorsed the platform, and more
and more candidates at every level of government have adopted very
progressive housing platforms
during the 2020 presidential campaign.

Gowan says the stimulus package passed in response to the
pandemic is geared too much toward property owners and big
business. There should be rent cancellation right now as tenants
try to navigate economic uncertainty, and the property owners are
the ones who should be applying for relief, not individual tenants,
he believes.

“We need to press pause on the housing market right now,” he
says. “Otherwise, the consequence will be a wave of
evictions.”

The housing-occupation movement has provided a potent argument,
and strong visuals, during a crucial pivot point for housing
legislation. As the coronavirus pandemic’s impact on politics and
policy remains to be seen, housing justice advocates say that such
a disruption only points toward better things in the future.

“The overarching objective is to not go back to the same
systems that have brought us to this place,” says Fife. “We
need to move from an extractive economy to a regenerative economy,
where people have what they need to thrive.”

A closer look at AOC and the Squad’s housing platform

Renovated Mid-Century in a Quiet Corner of D.C. Asks $2.3M