Wherever rich New Yorkers built their homes in the 19th century,
they also built private stables for their expensive horses and
carriages—with upstairs living quarters for a coachman or
groom.

So when Upper Fifth Avenue along Central Park became the
city’s new Millionaire Mile during the Gilded Age, certain Upper
East Side blocks to the east of Park Avenue were turned into
unofficial stable rows.

East 66th Street between Park and Lexington Avenues is one of
these former stable rows, with three spectacular restored carriage
houses surviving today. 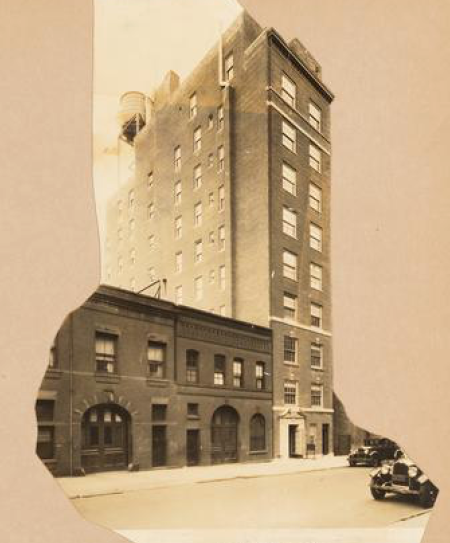 Built in 1890, these
two Romanesque Revival carriages houses were purchased eight years
later by William C. Whitney, who lived a few blocks away in a
mansion at East 68th Street at Fifth Avenue (at left).

Whitney was a financier and secretary of the Navy under Grover
Cleveland, according to the Upper East Side
Historic District Designation Report made by the Landmarks
Preservation Commission in 1981.

Down the block at number 126 East 66th Street is what remains of
another delightful carriage house, also with a Whitney connection.
This one is three stories, and it too reflects the Romanesque
Revival style, according to the LPC report.

Number 126 was commissioned in 1895 by sugar baron Henry O.
Havemeyer, whose mansion residence stood at One East 66th
Street.

After it was completed,
Havemeyer sold it to businessman, yachtsman, and Standard Oil
trustee Col. Oliver Hazard Payne, who happened to be Havemeyer’s
neighbor as well as the brother-in-law of William C. Whitney.

A
1902 article in Outing magazine called the Havemeyer-Payne
carriage house “always as clean as a new pin, with space enough
for every style of pleasure vehicle that a gentleman’s fancy can
picture.”

More than a century later, 110 East 66th Street is home to a
plastic surgeon’s office, while 112 appears to be a single-family
dwelling.

Number 126 was partly demolished at some point in the 20th
century. Even without its other half, what remains is still
something special.

The Upper East Side is home to more former stable rows with
enchanting carriage houses, such as
East 73rd Street between Lexington and Third Avenues.

As NYC neighborhoods push back against rezonings, can the city meet its affordable housing goals?