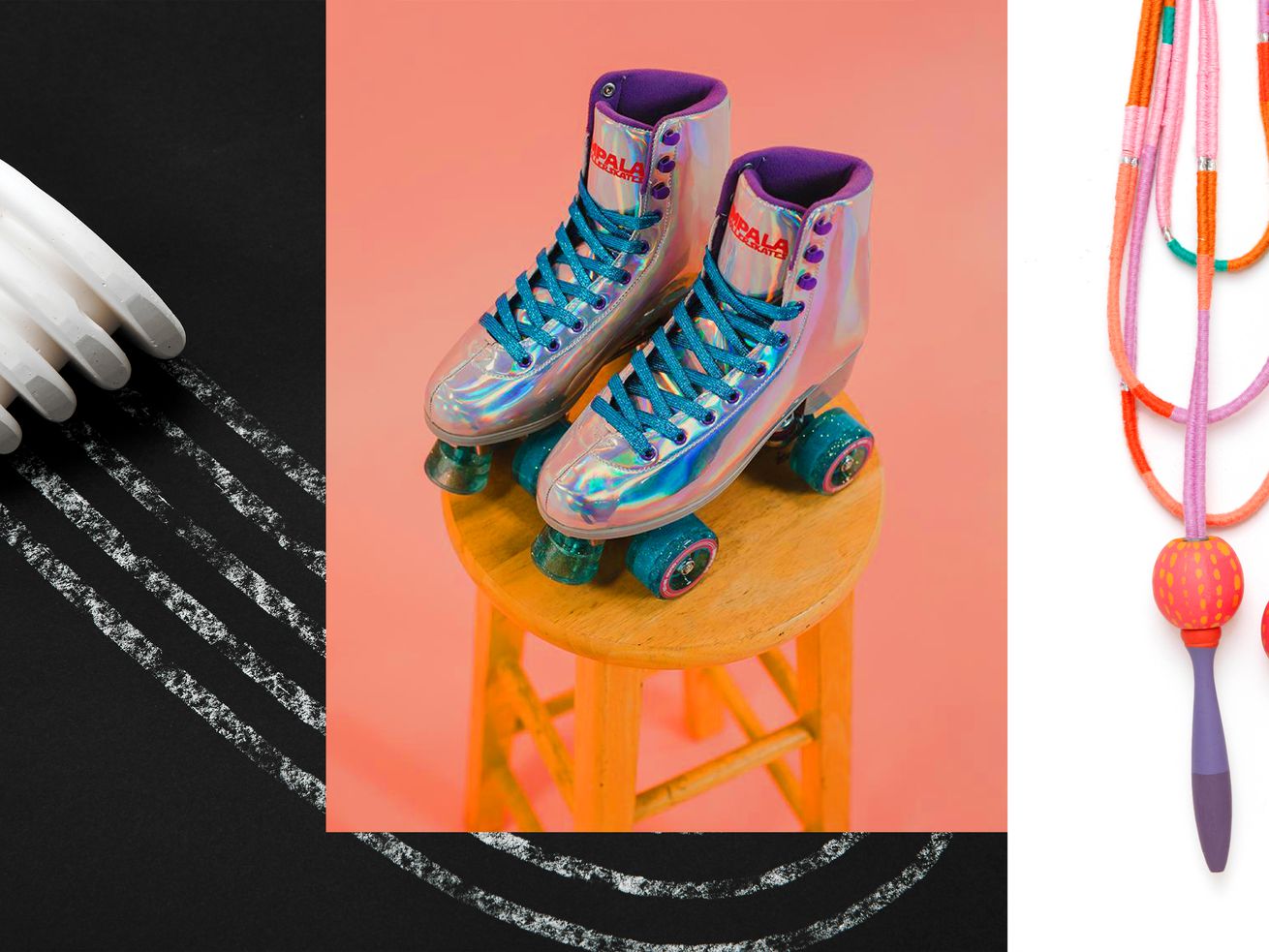 Activities
associated with childhood are defining the summer of 2020 for
adults and kids alike.

Last week, Jennifer Schecter hit a stroke of luck and finally
got an inflatable pool for her 9-year-old son. And it couldn’t
come soon enough. The temperature in New Orleans, where she and her
family live, was climbing into the 90s, and the local pools, where
they’d normally cool down, have been closed because of the
coronavirus pandemic. After weeks of trying to buy one from a local
store, she only found empty shelves.

Online, it was even worse:
long back orders or prices that were more inflated than the
pools themselves. She was empty-handed until a friend of hers was
vacationing in a small Mississippi Gulf Coast town and found one in
stock at the local Walmart.

“Everything has been so disappointing for my son for
months,” says Schecter, a marketing specialist at Trahan
Architects. “So this pool has been something that we could do for
him that would bring some joy and some sense of normalcy and
newness at the same time.”

Schecter had the same idea as countless other people trying to
salvage summer: Find something joyful—ideally something
reminiscent of fun activities from the past.
Instagram influencers are flocking to kiddie pools. A surge in
retro roller-skating
has occurred on TikTok.
Sidewalk chalk has made a comeback.
Papier-mâché is a craft of choice. It’s the Great
Regression of 2020. Activities associated with childhood are
defining the season ahead. 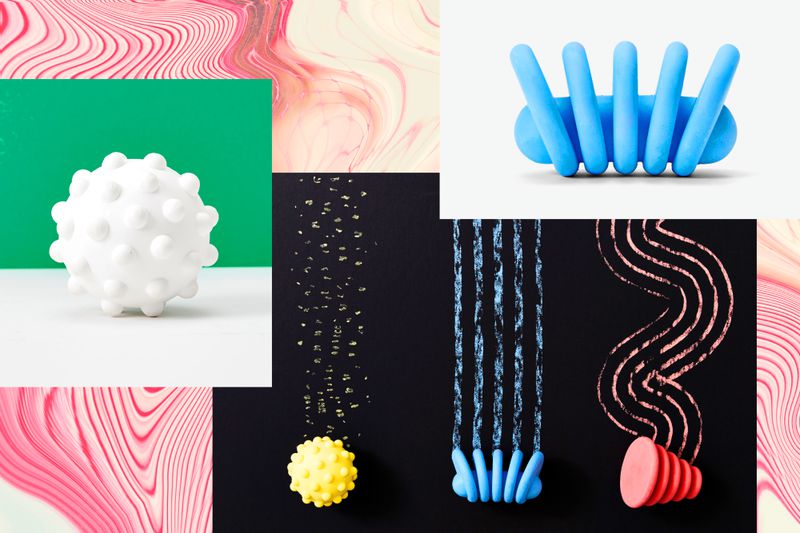 Areaware
has become known for objects, toys, and games for all ages that are
appealing as both sculptural pieces and for play. The brand
launched its Moon Chalk in the fall of 2019.

The Great Regression represents the convergence of a handful of
trends from the past couple of years that nod to a return to a
former state. In the design landscape, there’s the
rise of round, childlike forms that evoke cuteness and
kindercore, the Strategist-coined trend of products in
toddler-esque primary colors. You could also lump the
reboots and rewatches of ’90s sitcoms like
Living Single, Friends,

Seinfeld, and
Saved by the Bell under this umbrella. This isn’t to be
confused with nostalgia,
which distorts the past and makes the false assumption that
everything was “better back in the day.”

There’s usually two responses to seeing something that
references childlike attributes, according to social psychologist
Oriana
Aragón: either your guard goes way up or way down.

“If you see cuteness and you see yourself as a care provider,
it can be a stark reminder that you have responsibilities,” says
Aragón, a professor at Clemson University who has been researching
the
science of cuteness. “If you see it from the angle of a
person receiving care, which I think might be happening now,
cuteness is fun, it’s whimsical, it’s easy.”

Sales of inflatable pools and pool-related products on Amazon
are nearly twice as high as last year, according to a
MarketWatch story. And
it’s adults, not just kids, who are using them.

Kris Myllenbeck, founder of Mylle, a company that makes inflatable
pools with a
“millennial aesthetic,” estimates that about half of the
customers are purchasing the pools for themselves, and the other
half are buying them for their kids. (She bases the estimate on
anecdotal evidence, like Instagram
tags, or from customers’ feedback.) It’s a split that makes
sense considering Mylle’s origins: Myllenbeck, who is a stylist
and art director, wanted a nice-looking inflatable pool for her
daughter, but she couldn’t find one that didn’t feel out of
place in her Seattle apartment.

“My boyfriend and I used to love blowing up our inflatable
pool and hanging out,” Myllenbeck says. “We originally wanted
one because of our daughter, but also because we’d enjoyed them
before ourselves. When Mylle started, it was for kids, but I also
had friends who saw them and wanted them in their backyards.” 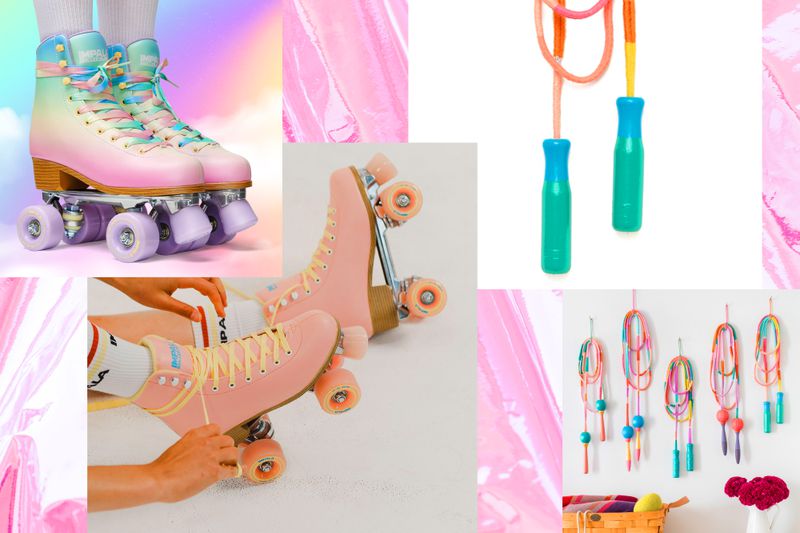 If Mylle’s pools are “kid tested, mom approved,” Alicia Scardetta’s
prismatic fiber-wrapped jump
ropes could be considered “kid inspired, artist approved.”
The custom one-of-a-kind pieces — which are made of cotton ropes
wrapped in colorful fibers and feature vintage handles repainted in
vibrant hues — are inspired by Scardetta’s memories of
youth.

“It’s growing up in the ’90s, Nickelodeon colors and Slime
Time,” Scardetta says. “Making the jump ropes was about going
to the source of those memories and redefining this object that is
so closely associated with girlhood.”

Scardetta made her first jump ropes while following the
Brett Kavanaugh Senate confirmation hearings, which animated
the conversation around the Me Too movement.

“That was a horrible time,” Scardetta says. “That was a
time when you would turn on the news and the things people were
saying about women were so awful. And people felt terrible. It felt
weird to say, ‘Here are these jump ropes.’ But this is what
they’re about: celebrating girlhood — the thing that all the
people on TV were saying horrible things about.”

The Brooklyn-based artist saw interest in these pieces swell
earlier this year, before COVID-19, even though she introduced the
series in 2018. She attributes the lag in interest to things just
taking a while to get noticed.

“These ropes have existed in a weird space and time,”
Scardetta says. “I guess you can say that about anything people
make during the Trump administration. People want to see something
that’s lighthearted and fun. I don’t want people to take their
mind off [political issues], but having some source of joy is also
important.” 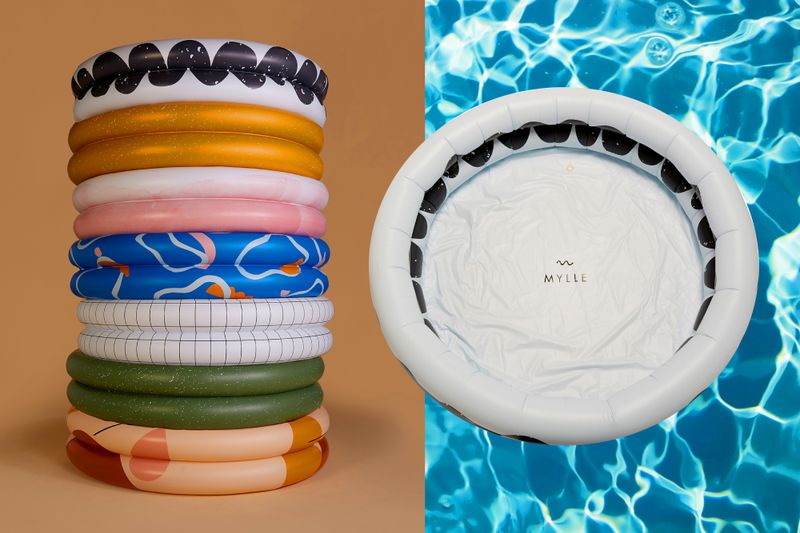 I shared pictures of Mylle’s pools, Scardetta’s ropes, and
chunky
Moon Chalk from Areaware (which was released in late 2019) with
Aragón before talking to her. She described the images as “an
adult version of cute” and offered a little speculation about
their appeal.

“They definitely are about letting loose and being a kid
again. All of them are playful in a way, and they’re allowing us
to have that feeling … As we face stressors, sometimes we regress
and go to simpler times. We may behave as if we’re younger.
It’s an old Freud
theory. You’d have to talk to a clinical psychiatrist about
that.”

But it doesn’t take a psychological diagnosis to explain the
need for fun activities. It’s something adults and kids alike
need, which was certainly the case for Schecter and her family.

So far, having the pool has been a revelation. She, her husband,
and her son invented games to play in it, like sea-creature-themed
charades and whirlpool (they run around to make the water spin,
then sit down while the water is still moving). It’s an active
antidote to summertime boredom and cabin fever that the whole
neighborhood seems to enjoy.

“My son can only build a LEGO set so many times before you
want to throw it out the window,” Schecter says. “We’re on
day four of having the pool. As soon as it was ready, the neighbor
girl ran over and was in it too.”

Coronavirus could be deadly for the U.S. homeless population. Are cities doing enough?