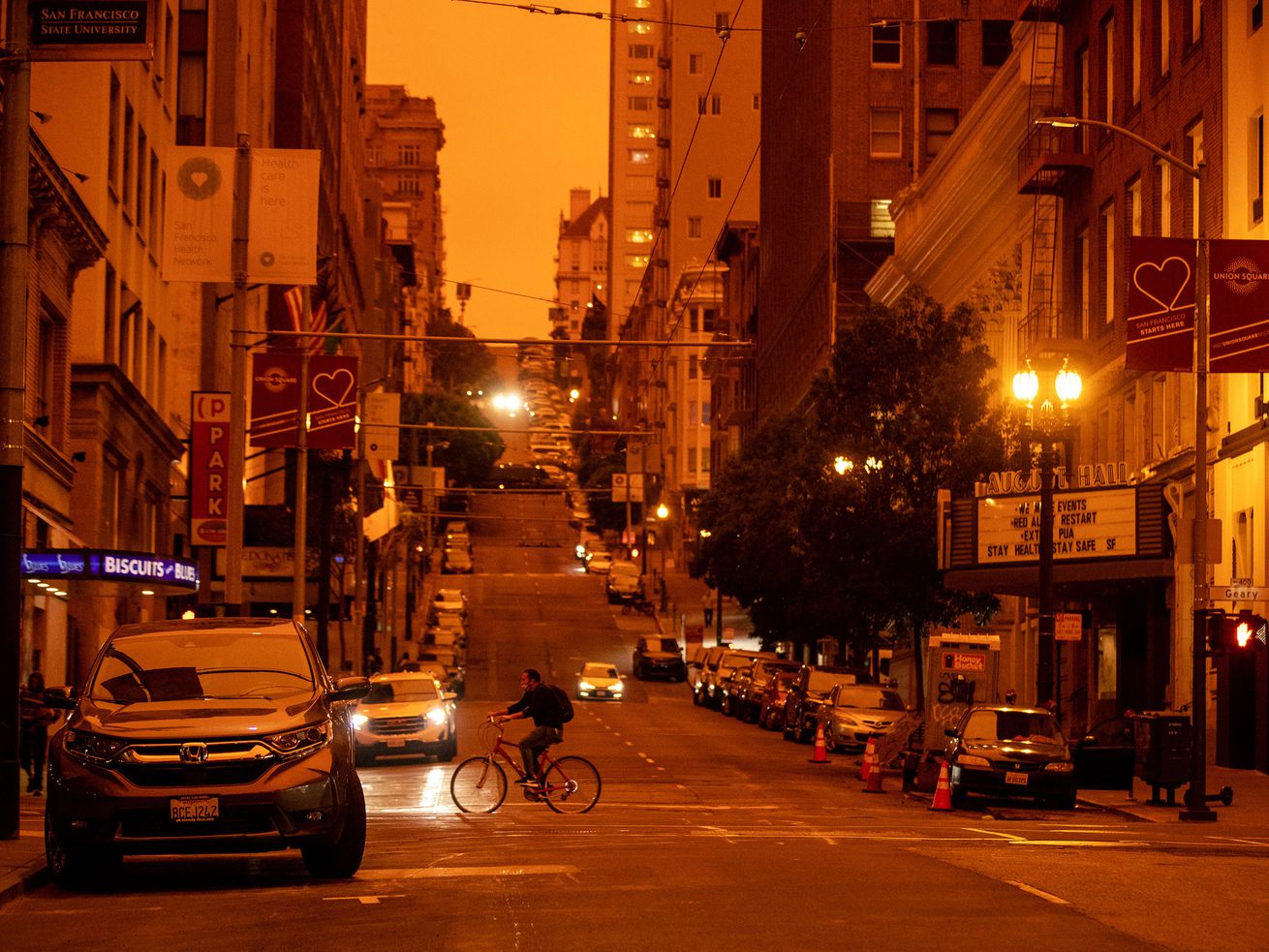 Nature sends us a wake-up call.

It’s gone now, and none of the pictures quite captured what it
was like. I live in Oakland, and none of the photographs taken in
the Bay Area yesterday accurately depict what it was really like
— the sickly, hideous orange of the sky, the creeping feeling of
dread, the uncanny disquiet when the sun simply … didn’t rise.
It wasn’t just that iPhones filtered out the hellish color that
skies simply shouldn’t be. It was the way it stayed as dark as
predawn all day until, abruptly, it was evening, and then bedtime
— like an all-day eclipse. It was the way the sky was so much
bigger and wider and more awesomely present than something that is
usually so dull and cloudy and dark has any right to be. The
pictures you saw shared online looked exactly like apocalyptic
movies, like the sepia filter Hollywood uses to make Mexico,
India, and the Middle East look like Blade Runner 2049. But
that familiarity was misleading. This looked like nothing you’ve
ever seen. Like nothing you’d ever want to see.

We closed the windows (of course), but also closed the shades
and lowered the blinds, and looked away from the eerie bloody gold
light creeping through the gaps. We looked at the clock to remind
ourselves of what time it was and were never quite convinced. We
stifled our brains’ flight responses and were careful to only
panic on social media. We stayed indoors. We didn’t walk the
dogs. We waited for it to be over.

Is it over? The light is still a little bit off, but as I’m
writing these words, it feels almost like a normal morning in
Northern California during fire season: hazy and drab, with a dull
gray sky that you might mistake for clouds or fog. There’s enough
smoke in the air that we still check airnow.gov or purpleair.com to
find out how safe the air is to breathe. It reads: PM2.5: 175 —
“Unhealthy.” But the sun came up, so we went about your day.
Ash is falling from the sky, but this is what normal feels like
now. This is fine.

In a sense, it’s true. There’s smoke here, but there isn’t
fire. It’s hard to explain to relatives in other parts of the
country not currently on fire that we weren’t, personally, in any
danger. Just as it’s hard to convince your brain that the sun
being blotted out of the sky is no big deal. But wildfire is not
likely to touch most of the Bay Area. The Oakland hills have burned
before, and likely will again, but the fires burning now are far
from my home (on
the doorstep, as it happens, of the footprint of the 2018 Camp
Fire). California’s forests are built to burn and must burn
and will burn. This is not even a bad thing: When under the care of

much more than they ever have since.

What has changed, for those of us in urban California, is that
fire season isn’t something that you can ignore. After a century
of fire suppression, ecological neglect, and malpractice, global
warming is forcing itself on us. Yesterday was the sort of freak
experience you can’t forget. No one remembers something like this
happening before. It makes an impression on you. It makes you
wonder why climate change isn’t the only thing anyone talks about
and why we aren’t all on strike until something is done. The
orange sky of September 9 was a meteorological fluke, the result of
smoke that has been swirling across the state for weeks — from
the Bear fire to the north, or the LNU lightning complex to the
northeast, or the SCU lightning complex to the southeast, or the
CZU lightning complex to the southwest (or all of the above) —
getting caught above the marine layer blowing in from the Pacific.
Instead of falling to the earth to be breathed into our lungs, like
it normally does, it hung in the air, blotting out the sun. It was
an experience, strange beyond words, “beyond the scope of our
models” as the National Weather Service helpfully tweeted.

Now that it’s over, did September 9 mean anything? It surely
means something that every city in the I-5 corridor, from San Diego
to Seattle, is looking up at smoky skies right now. Those layers of
smoke make it impossible to see the Pacific coast from space. It
must mean something that tens of thousands of people have been
displaced or evacuated and that, barely a month into fire season,
more of California has burned in 2020 than in any year prior, It
means something that most of the biggest and worst fires in
California history have happened in last five years. It must mean
something that “fire season” has evolved from a period of
increased awareness and caution to a months-long season of
omnipresent smoke and dread. It must mean something that fire now

creates its own weather.

Fire season will go on until we get rain, like it does every
year (though the rain comes later and later). In the San Gabriel
Mountains above Los Angeles, the Bobcat fire is expected to burn
until October 15. The sun will glow red again, even if the whole
sky does not. But if the day that the sun didn’t rise can’t
wake us all up — from the East Coast to the West Coast — then
what signal must providence cook up next?

When living apart keeps you together

Sea Ranch-Esque Compound Comes With Its Own Funicular