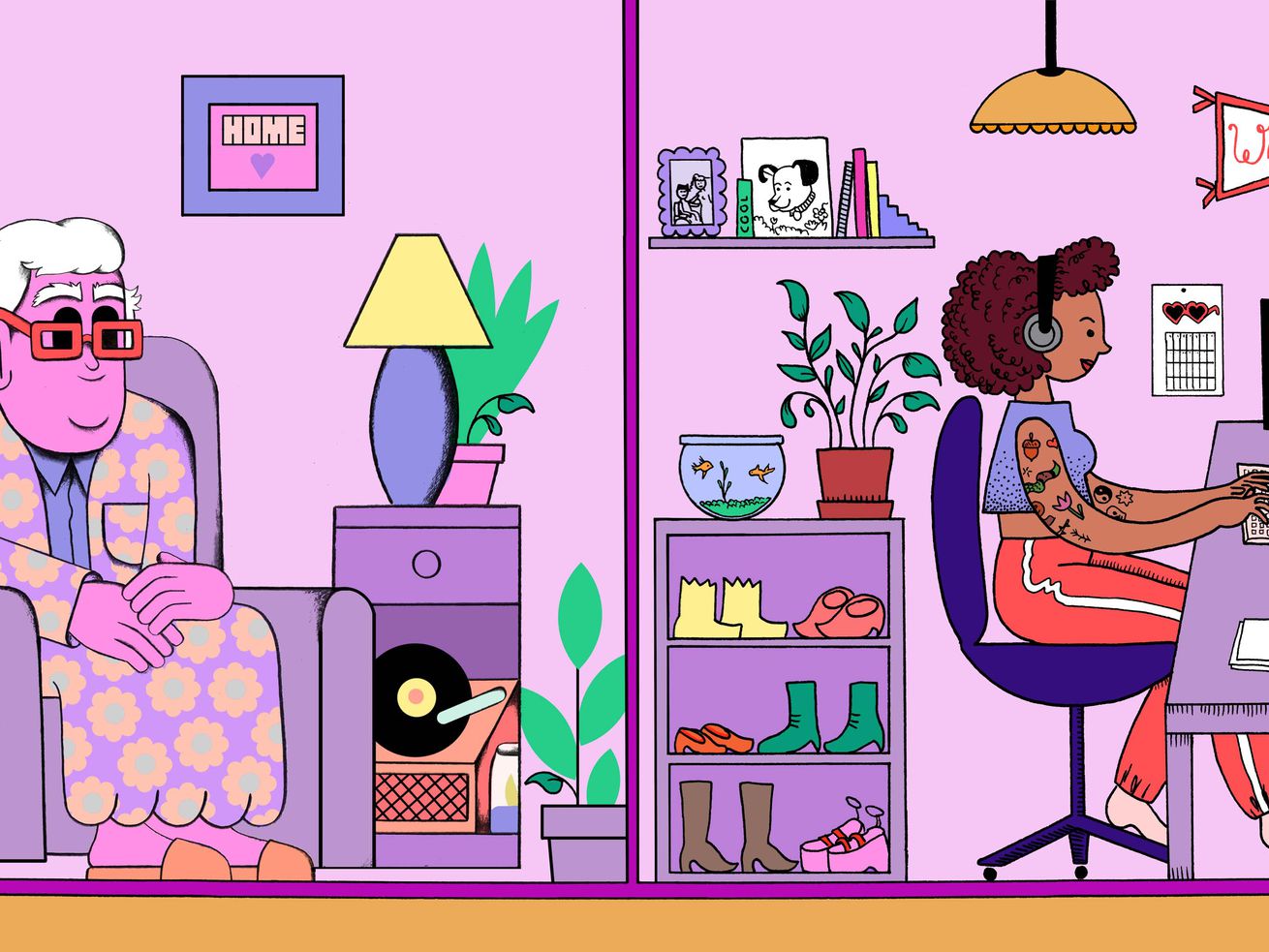 The ups and downs of multigenerational housing.

You can see the allure: grandma coming up from her place
downstairs to read bedtime stories or babysit, not to mention being
able to split utilities and mortgage payments with the in-laws.
It’s no wonder
multigenerational living has been on the rise in recent years.
While the move is most popular among nonwhite populations, the
total number of people living in such homes went up from 17 percent
to 19 percent between 2009 and 2014. As of 2018, a record 64
million Americans are living in multigenerational homes, a move
that can seem even more appealing during a global pandemic. From
being able to closely care for vulnerable family members to having
a larger community at home during quarantine to help with child
care and at-home schooling, COVID-19 has cast a new light on this
living trend.

Yet, little is known about a subsection of that trend:
multigenerational homebuyers. To explore what it means and what it
takes to not only live together but to make major life purchases
together across generations, Curbed spoke to five people scattered
around North America who have taken the plunge.

Keph Senett: This wasn’t something I had
planned on, but with the recent economic downturns over the last
couple of years, and now COVID, we started thinking about what we
could do to make our positions more secure. My mom, who is a
therapist, has had her house for ten years. I moved into what she
was using as a counseling room in January, and she got a little
office space outside of the house before the pandemic.

Before this, I had no intention to become a homeowner for many
reasons, including that it’s nearly impossible because of the
indebtedness you have to go into. My mom had paid for the first
chunk of the house, and I took over the rest with some money from
my retirement savings plan, untaxed. There are so many pros to
this, from reducing our environmental footprint to sharing labor
and resources.

Pega Ren: Gravity has lightened for me by 20
percent — the financial burden was lightened. I can now be picky
about the clients I take on. Life got easier in a number of ways,
and she cooks! I was able to offer her the security of a single
place to live, and she was able to offer me the security of staying
in my home more easily, now that I don’t have to work all the
time to afford the house. We’ve been able to convert the money
we’ve saved into a new roof and fixing the parking pad — things
that would have been very stressful otherwise.

Just recently, I had an accident. I cut my leg on a faulty step
coming out of the hot tub. I was caught and hurt and was able to
just call for Keph. She came to the hospital with me. She just took
care of it — all I had to do was call for her.

Margaret Esposito Living with her partner and mother in Lee,
Massachusetts

I moved back a couple of years ago and started looking for
apartments. The rental market in the area I live in has a lot of
second-home owners from New York City and Boston, so it’s a lot
of short-term rentals. The few I found were either out of my price
range or didn’t allow a dog. I started toying with the idea of
buying a house on my own, but I didn’t have anything for a down
payment.

At the same time, the apartment building my mom was living in
sold, and the residents were told they’d have to move. My mom had
cash from selling the house I grew up in and a divorce settlement
with my father, but not credit, so we decided to combine our assets
and buy something together. We bought a single-family home with
three levels. We each have our own level, with the kitchen as a
shared space in the middle.

We hadn’t lived together at that point in over ten years. The
first six months of living together didn’t go that well. We’re
equal owners, so it can be hard to come to an agreement on major
investments. The house needed significant updating — lots of
wallpaper and fixtures. Most of that we did ourselves. It’s not
as picturesque as HGTV makes it seem, especially since we don’t
have the same taste. There were times we considered selling, but it
has worked.

Also, when we moved in two years ago, I was single and actively
dating. There’s a lot of stigma when people say they live with
their parents. I don’t think people believed me when I said I
owned the house. Now that my partner is living with us too, we’ve
talked about my mom moving out. My partner and I want to live alone
before we have kids, but when that happens, my mom has offered to
move back in and be a live-in nanny in exchange for rent. That’s
the most economical form of child care for me. What are we going to
do — live alone for six months just to have her move back in?

Kyla Charles Living with her parents, husband, and three kids, plus
one on the way, in Madison, Wisconsin

It was much less planned than someone might think. My husband
and I were living in our first home, and I would cruise home
listings just to look. One of the homes I stumbled upon was out of
our price range, but it was a beautiful home. It was nearing our
five-year anniversary, so I emailed my mom and made a joke about
getting us a great gift. One day, there was an open house, and my
mom asked if I wanted to go look. When we walked in, I could tell
she had researched it quite a bit and had taken the joke more
seriously.

They owned their condo, and we owned our home. Thankfully,
summer 2018 was a great time to sell a home. We put that money
toward a down payment and got a mortgage together. Along with the
mortgage, we have a household checking account that we all pay into
each month.

Our situation works because it’s a larger home where we have
private space and my parents like to snowbirdand go to Arizona in
the winter. Probably the biggest point of contention is household
chores. As a young family with little kids, we’re undoubtedly
much messier. My parents have always had a house cleaner, but I’m
a stay-at-home mom, so that’s not something we do. She comes and
cleans their space and the joint space but not our space
upstairs.

Martha Pallí Living with her mother and son in Fort Worth, Texas

My mom thought about moving into an active senior-living place,
but I didn’t like that. I said I could always move back in, but
then I would lack some privacy. We thought about buying duplexes
next to each other, but then we saw that a developer was building
multigen homes. It’s essentially a house with a small apartment
with a kitchenette inside. The “apartment” doesn’t have an
oven or a stove, so it’s still considered single family. We only
have one property tax and one set of utilities.

My mom and I have always been very close. We used to live next
to each other before I was divorced, and after that we were just
six miles away from each other, so it hasn’t been challenging at
all. Especially during the pandemic, my son has had to do distance
learning, and my mom took it upon herself to help him while I work
from home, so it’s all worked out beautifully. I 100 percent
recommend it. Recently I’ve been sick, and it doesn’t matter
how old you are: When you’re sick, you want your mom.

When they sent us the title documents at closing, they listed my
mom and I as husband and wife! We were like, “Um, no!” Everyone
is so used to couples buying residential properties.

Source: FS – All – Architecture 10
Thinking About Going in on a House With Grandma? Hear From 5
Families Who Bought Together.

Renovated Mid-Century in a Quiet Corner of D.C. Asks $2.3M