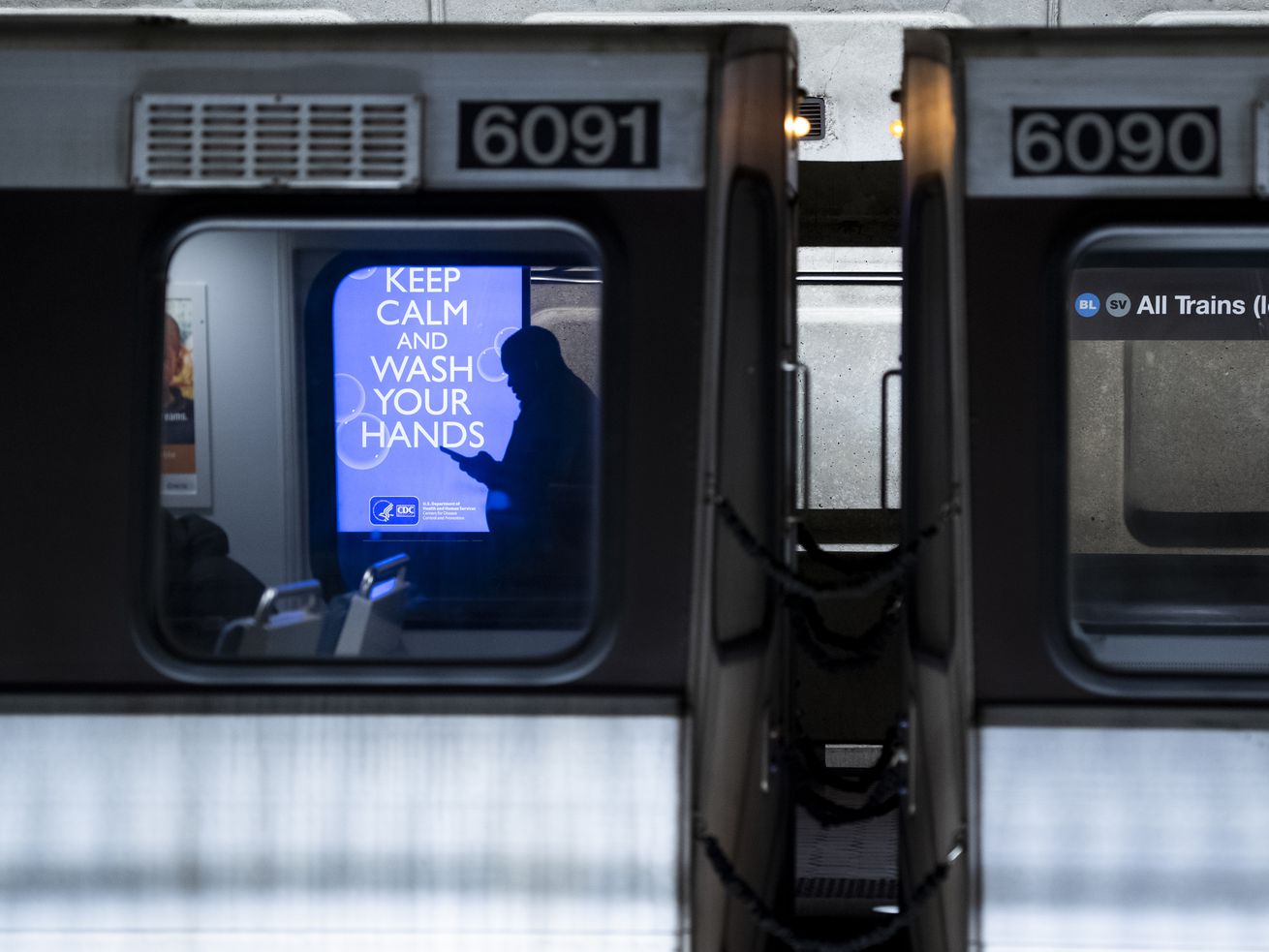 Ridership
is down 30 to 80 percent on most major transit systems. | Photo By
Bill Clark/CQ-Roll Call, Inc via Getty Images

It’s a surreal scene for city dwellers. Empty sidewalks,
sparsely populated buses, and transit agencies pleading with
passengers on social media not to ride them unless absolutely
necessary. And by all accounts, would-be riders across the country
are obeying orders to
stay home and
slow the spread of the novel coronavirus.

The
numbers are grim. Major transit agencies have reported
ridership dropping by more than half over the last two weeks.
But an even larger catastrophe is looming. With fewer riders paying
fares, and operational costs rising due to increased sanitizing of
vehicles and facilities, transit systems in cities like
Boston,
San Francisco,
Austin, and
Los Angeles have announced service cuts, including, in some
cases, eliminating all overnight service at a time when there are
no other options for transit-dependent riders to get around
safely.

“We are seeing steep declines of 30 to 80 percent,” says
Steven Higashide, director of research at TransitCenter. “At the
same time, the crisis underscores how essential public transit is
for people who have essential jobs or need transit to go to the
grocery store or get to a doctor’s office.”

Long before a pandemic was circulating the planet, the policy
team behind the
Green New Deal was plotting out a path to eliminate the use of
fossil fuels in the U.S. transportation sector by 2050. The
recommendations in their report, “A
Green New Deal for City and Suburban Transportation,” out
this week, are even more urgent for a country facing not just a
climate crisis, but public health and economic crises as well.

In the pre-COVID-19 world, transportation made up one-third of
U.S. greenhouse gas emissions—with a majority of those emissions
coming from cars and trucks. “It’s not enough to look at
solutions like flying less or building high-speed rail,” says
Higashide, one of the report’s co-authors. “We have to look at
surface transportation.”

The
report, by Data for Progress and the Ian L. McHarg Center for
Urbanism and Ecology, along with national transportation advocacy
groups TransitCenter and Transportation for America, says the
country can achieve a safer, more equitable, zero-emission
transportation system with a change in funding priorities, a push
to build multimodal streets, and a goal to put the majority of
Americans within walking distance of frequent public transit by
2030.

After the 2008 financial crisis, transit
ridership—particularly bus ridership—saw a
similar cratering, which most systems
never really recovered from. But where the recovery efforts a
decade ago almost exclusively focused on infrastructural
improvements, the Green New Deal’s proposal centers around
bolstering ridership and service. A large part of what the policy
recommendations are arguing for is operating assistance, which
would allow agencies to provide more robust service while paying
workers higher wages.

Accessibility—both physically and logistically—is another
key component of the Green New Deal’s proposal. In addition to
funding the country’s
multibillion-dollar sidewalk repair backlog to improve
last-mile connections, streets would be designed to be used by

Aligning federal dollars behind cleaner, more efficient modes
like walking, biking, and transit—and away from
projects like highway expansions, which are
known to increase traffic and pollution—goes counter to the
way virtually all transportation is currently funded. But the Green
New Deal’s policymakers have a voice through the
new Congressional Future of Transportation caucus formed in
October, which is working to prioritize investments that lower
emissions while advancing socioeconomic equity.

The Green New Deal’s plan also creates an opportunity to
correct previous policies that attempted to reduce emissions but
failed. The deal put in place by the U.S. automaker bailout after
the 2008 financial crisis, for example, was meant to require
companies to
produce more fuel-efficient cars, but automakers soon found a
way around the policies by pivoting to
SUVs. The report notes that the key to reducing emissions is
not adding more electric cars, but
fewer cars overall.

“The path to net-zero is easier with every car we take off the
road,” says Billy Fleming, report co-author and director of the
Ian L. McHarg Center for Urbanism and Ecology. Fleming envisions
not simply swapping out all 272 million U.S. vehicles with electric
versions, but offering incentives to trade in an internal
combustion vehicle for electric bikes, transit passes, or cash.
“Any climate proposal that does include EV incentives will be
most generous for low-income people or those in rural areas not
well-served by transit.”

The transportation strategies outlined in the Green New Deal
proposal will not only guarantee the dramatic reduction of
greenhouse gases, they’re also broadly popular, according to

polls by Data for Progress that accompany the report.
Two-thirds of U.S. voters—across all political party
affiliations—believe their communities would benefit from
expanding public transit. Even more voters—77 percent—believe
expanding transit would benefit the U.S. overall.

Such bipartisan support might help feed the Green New Deal’s
ideas into recovery bills in Congress, where a $1 trillion economic
stimulus plan has been proposed this week with zero allocations for
transit. On Friday, 52 members of Congress
signed a letter requesting $16 billion for transit agencies be
added to the stimulus, a number determined by the American Public
Transportation Association. (Boeing, for comparison, is asking for
$60 billion.)

As stay-at-home orders have recently been extended to last
weeks—if not months—the financial free-fall of transportation
agencies has prompted
calls for a mass transit bailout. But funneling money to
transit agencies wouldn’t technically be a bailout, notes Fleming,
because transit agencies are already public—and funding them
should be as essential as keeping school districts and housing
authorities running. “For them, this isn’t a bailout, this is
about sustaining them through a global pandemic.”

Where the
airline industry, the
cruise industry, and even the
airport ground transportation industry immediately issued
high-profile pleas for financial protection as passenger numbers
plummeted, there was no unified call from the transit
industry—until this week.

“Bailout” is the wrong word for what transit
needs.

Bailouts are for nonessential business, not public health resources
to combat the pandemic. They’re for airlines, not hospitals.

Transit is part of the pandemic response. It needs emergency
resources to protect public health.

Over a 24-hour period, representatives from over 200 U.S.
transit agencies
signed on to a letter from Transportation for America and the
Union of Concerned Scientists urging Congress to approve $13
billion in direct financial assistance, targeted to the agencies
impacted the most, to keep buses and trains running.

Part of the challenge is that representatives don’t see public
transit as an essential service for the country in the way the
government views airlines and automakers, says Beth Osborne,
director of Transportation for America. But without emergency
operating funds, Osborne says drops in ridership could lead to even
more service cuts, which would make it even harder for riders to
follow social distancing guidance and potentially introduce
additional health threats.

“If they cut service, it means more crowded buses for the most
transit-dependent that would be the least capable of working from
home,” she says. “Congress needs to step in and make sure these
essential systems are running to make sure these health care
workers can get to where we need them to care for us and our loved
ones.”

A handful of transit agencies, like
Detroit, are making transit free to better serve health care
workers and keep drivers protected. Houston is putting more buses
into operation to
create temporary shuttles between medical centers. But some
transportation experts are recommending going one step further.
With streets so empty, cities could experiment with
dedicating lanes to transit and emergency vehicles, which would
not only keep buses and other essential services moving more
efficiently, it would also start to prime U.S. cities for
recovery.

The upending of the American economy will make affordable,
ubiquitous transit even more important. With unemployment estimated
to be as high as 20 to 25 percent, household income will be lower,
and many families may not be able to keep their cars.

“Bus-only lanes will allow transit to be as operationally
efficient as possible with limited operators and will help transit
move people in a recession at a lower cost to users,” says Juan
Matute, deputy director of UCLA’s Institute of Transportation
Studies. “The travel-time savings will gradually build over time
as the economy and travel activity recovers. And then we’ll need
bus-only lanes.”

Source: FS – All – Architecture 10
Transit is in trouble due to coronavirus. This Green New Deal plan could help.

A modern cabin in the woods inspired by Thoreau