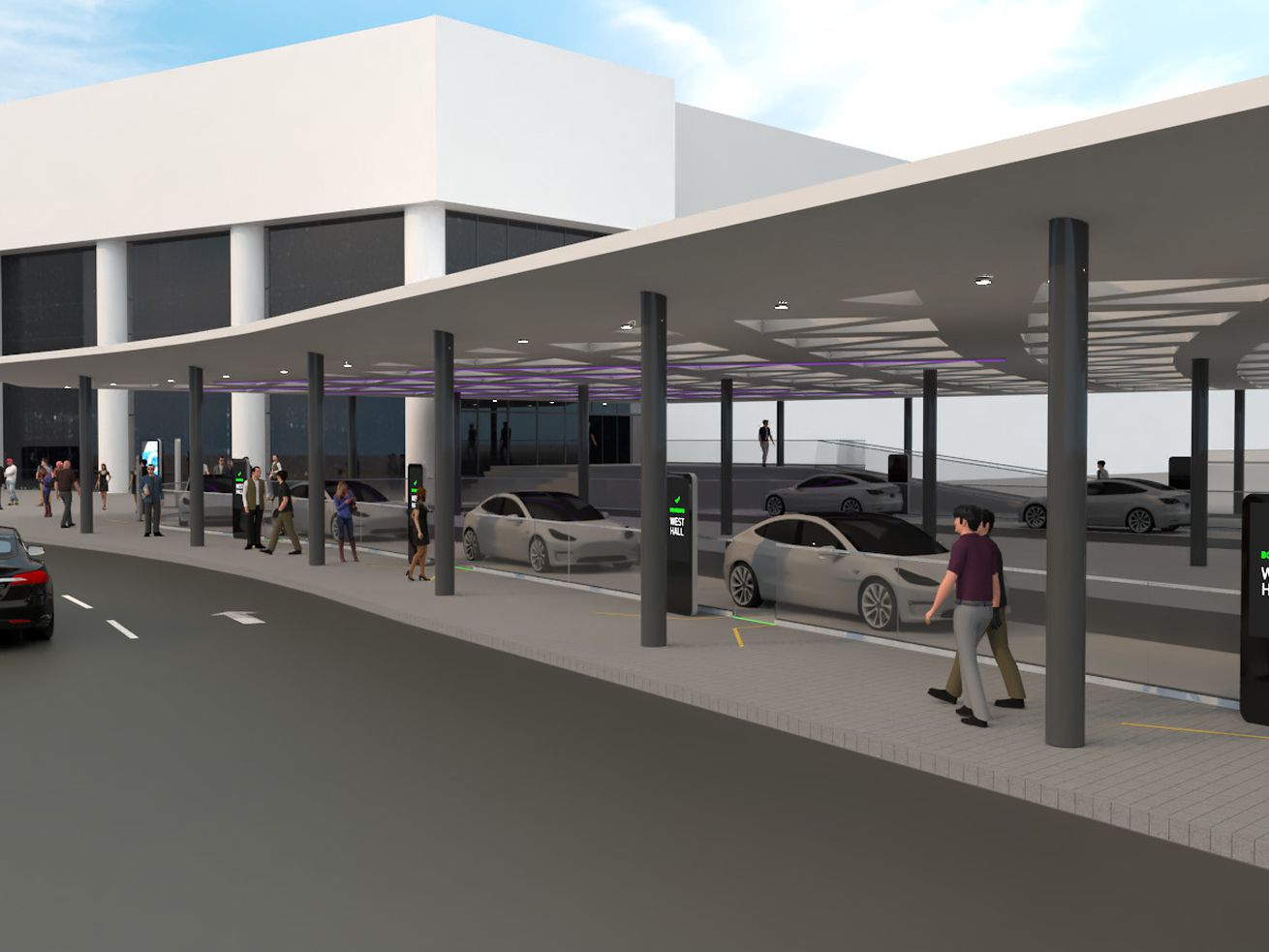 Does this look like a “people mover” to you?

For the 175,000 tech fans descending on Las Vegas for the
Consumer Electronics Show this week, one of the must-see
attractions is located not among the acres of trade-show booths,
but just outside the convention center.

In November 2019, Elon Musk’s Boring Company started work here
on a project for its first paying customers: an
underground transportation system that will carry passengers less
than a mile from one end of the convention center to the other.
Eager CES attendees hoping to catch a glimpse of the action can
peek through the fence at the
construction pit, where tunnels are in the process of being
bored as part of a
$48.68 million contract with the city’s convention and
tourism authority. (Don’t worry: If you’re not at CES,
there’s a livestream.)

“I think that 10, 15, 20 years from now, we’ll look back at
this as a Kitty Hawk–type moment,” said Steve Hill, president
of the Las Vegas Convention and Visitors Authority, at the
tunnel’s November groundbreaking. “This technology has the
ability to change transportation not only here at the convention
center, which is important to us, and here in Las Vegas, but around
the country and around the world.”

Yet exactly what “technology” is being pioneered at the
convention center site is still up for debate. Although the project
is being
publicly dubbed as the “first underground people mover,”
what’s being built appears to be more of a mechanism for giving
one-minute test rides in Teslas.

The Vegas tunnel is the first commercial application of what
Musk has dubbed “Loop,” defined by the Boring Company’s website
as a “high-speed underground public transportation system in
which passengers are transported via compatible Autonomous Electric
Vehicles (AEVs) at up to 155 miles per hour.”

According to documents filed last year by the Boring Company,
the Vegas Loop is intended to move an expected 4,400 people per
hour in 16-passenger autonomous vehicles through two
0.83-mile-long, 14-foot-wide tunnels. The system is planned to be
open for testing by November 2020 and in operation by next year’s
CES.

But since the Vegas contract was awarded in May, Musk has made
public statements that contradict key elements of the Loop
proposal, including the type of track, speed, and vehicle type. 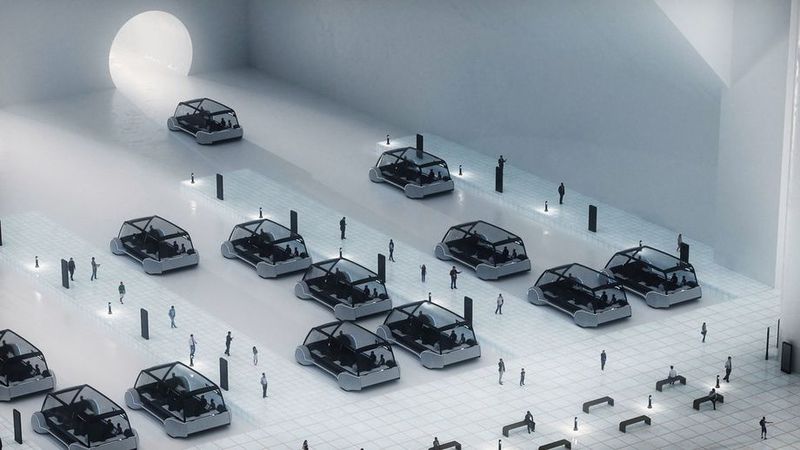 The
Boring Company The original proposal for the Vegas Loop showed
16-passenger electric vehicles. But these vehicles have yet to
materialize, and images of them have been removed from Boring
Company sites.

The most recent renderings from the Boring Company no longer
show the 16-passenger public transit vehicles that Musk has
promoted since 2017, and instead use what appear to be Tesla Model
3 cars that hold at most five passengers.

The vehicles also won’t be going 155 mph, as has been widely
reported. Because the vehicles will travel between three stations
along the 0.83-mile route, they will only reach speeds of up to 50
mph in each 0.4-mile segment.

And last month, Musk confirmed that the tunnels being dug were
indeed “road
tunnels,” not transit tunnels at all, where the vehicles
would travel on tires, not tracks. “Really, just an underground
road, but limited to EVs (from all auto companies),” he
tweeted.

As journalists in town from all over the world heap
social-mediated praise upon his plan to “solve traffic,” is
Elon Musk actually building a solution to anything at all?

Almost three years ago, in April 2017, Musk took the stage at
the
TED conference to propose an idea to eliminate the
“soul-destroying traffic” he experienced on his own Los Angeles
commute.

Musk’s plan at the time was to lower cars underground via
elevator onto electric “skates” that would whisk vehicles at
130 mph through a series of tunnels to their destinations. Musk
revealed he’d bought “some second-hand machinery”—a tunnel
boring machine previously used to install sewer lines in Northern
California—and was already digging beneath the Space X
headquarters near Los Angeles. The TED audience clapped
enthusiastically.

But when
transportation planners pointed out that the only way tunnels
relieve traffic is by moving high-capacity vehicles, Musk went on
the defensive. At a different conference, he
bashed public transportation—where riders must share space
with “a bunch of random strangers, one of whom might be a serial
killer”—and
called an influential transit consultant an “idiot.”

Then, in June 2018—about six months after his dustup with
advocates—Musk
abruptly changed his tune: The Boring Company’s plans would
be adjusted to prioritize pedestrians and cyclists over cars.
“Will still transport cars but only after all personalized mass
transit needs are met,” he wrote on Twitter. “If someone
can’t afford a car, they should go first.”

But Musk has provided no explanation for how, exactly, that
would work. 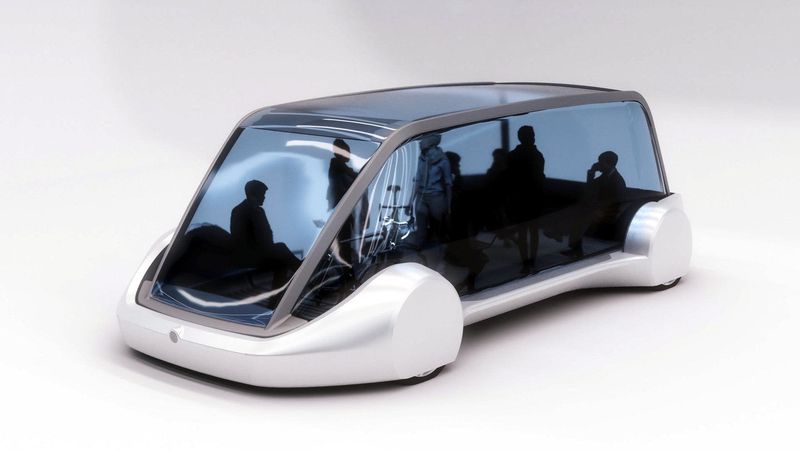 The
Boring Company The 16-passenger electric vehicle, which has been
shown in Loop renderings since 2017, has not materialized, although
Tesla recently unveiled a
novelty truck.

The rendering Musk often provides as evidence that the Boring
Company’s transit system would serve pedestrians and cyclists is
a 16-passenger autonomous electric vehicle, which, according to the
Boring Company, will be made with the modified chassis of a Model
X, Tesla’s SUV. The vehicles, which reportedly could be
platooned in convoys, look more like components of an airport
people mover than like cars.

“Elon
Musk’s tunnel idea is sounding more like public transit every
day,” I wrote in 2017.

But if you look at
that story today, the images of that 16-passenger vehicle have
all vanished. That’s because The Boring Company’s Instagram
account has been wiped: There are only three remaining images, and
every post made before December 2018 is now gone. All images of the
16-passenger vehicles have been completely removed from Boring
Company sites.

At the Boring Company’s first
test tunnel opening for Loop near LA in December 2018,
reporters boarded unmodified five-passenger Tesla Model X SUVs to
ride through the tunnel, not 16-passenger vehicles. At the
press conference, Musk said these SUV vehicles could also serve
pedestrians and cyclists. A journalist asked if the vehicles might
need bike racks for cyclists. “Yeah, sure,” replied Musk.

Later that night, Musk reiterated
on Twitter that the tunnel systems would have “continuously
circulating cars dedicated to pedestrians & cyclists.”

But each tunnel is only 14 feet wide, allowing only one vehicle
to travel at a time. It’s difficult to understand how any vehicle
serving pedestrians and cyclists might be given priority over
cars. 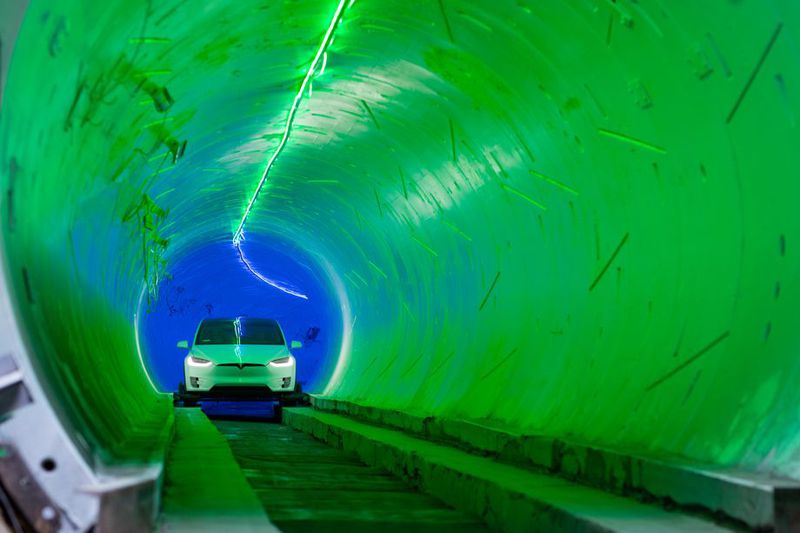 The
Boring Company Journalists who came to the Boring Company’s
December 2018 press event rode through the tunnel in unmodified
Tesla cars at speeds of 44 mph.

In June 2019, Musk hinted the Boring Company
might release a traffic model showing how vehicles would move
through the Loop, illustrating how pedestrians and cyclists might
engage with the system. The company has not publicly released any
such model.

There was one other change to the Loop system at the December
2018 test ride in LA. Instead of the electric skates Musk had
promised, a set of small retractable wheels locked the car onto a
paved track, turning Tesla SUVs and sedans into what Musk called a
“rail-guided train.”

“Previously we were going on an electric skate, and the skate
would carry the car, but that’s a more complex thing,” Musk
said.

But by May 2019, Musk wrote
on Twitter that both the electric skate and wheel guide ideas
were dead. The vehicles would travel autonomously at speeds up to
130 mph on their own tires through the tunnel, he said. In June
2019, the Boring Company released
video of a Tesla Model 3 driving through the
now-paved test tunnel unassisted.

When asked on Twitter why he
changed the plan, Musk replied, “This is simple and just
works.”

Musk is well-known for
abruptly changing product features. But with the elimination of
the electric skate and platooning capabilities, is Loop technically
public transit? Is it even new technology? A five-passenger vehicle
driving people less than a mile through a 14-foot-wide hole in the
ground sounds more like a valet service in a parking structure.

This doesn’t matter to media outlets like
Reuters and
CNN, which in the last two weeks have dutifully reported, based
on no new information besides Musk’s tweets, that the Vegas
transit system would be “hopefully
fully operational in 2020,” and people would travel 130 mph
or 155 mph through it, “from the
convention center to the Strip.” (The convention center’s
new building entrance is on Las Vegas Boulevard, where the Strip is
located.)

These publications also reported that other Boring Company
public transit projects are moving forward, which is not the
case.

proposed 18-mile tunnel to O’Hare Airport in Chicago. But
Chicago’s new mayor, Lori Lightfoot,
has not advanced the bid after Chicago officials who attended
the opening of the LA-area test tunnel
expressed doubts about the project.

Elsewhere, the Boring Company has held a
public meeting in Los Angeles for the
Dugout Loop, a proposed two-mile transit system to Dodger
Stadium, but no work has begun.

And a final proposed
tunnel from Washington D.C. to Baltimore is
not a transit system—it’s now being billed as
two 35-mile tunnels for electric vehicles that will move only
2,000 people per day. (Virginia officials who visited the Boring
Company also
came away unimpressed.)

The
Boring Company The Dugout Loop, a two-mile tunnel proposed for
LA’s Dodger Stadium was proposed in August 2018, but the project
has only held a single public meeting.

In the final weeks of 2019, Musk revived his tunnel vision on
Twitter, conducting a poll
asking if people wanted tunnels to “solve traffic.”

When the poll was completed, Musk
tweeted the results: “As expected, 69% want car tunnels. Stop
whining, subway Stalinists, the people have spoken.”

He later deleted
the tweet. But why? Is it because he called them “car
tunnels”? That’s actually what they are—they’re tunnels
being used to sell cars.

The federal tax credit offered to buyers of electric vehicles is
phased out once an automaker has sold a certain amount of cars.

But the bigger problem is this: Each time a city (or a reporter)
shows interest in Musk’s tunnel-boring scheme, it helps him sell
more cars. And each time city leaders promote one of his
fantastical ideas—tiny tunnels! autonomous vehicles!
platooning!—it does
serious damage to the
real-life solutions being proposed by experts that will
actually make life better for their residents.

I keep saying this. No one seems to be listening. Because you
can still read statements about the tunnels like this one,
published in
Popular Mechanics last week: “In about a year we should get a
better sense of just how tunnels for individual EVs may or may not
be able to solve traffic problems in cities.”

The Boring Company’s Vegas tunnel might seem mostly harmless
in a city
paved with moving sidewalks. But instead of putting people in
cars to make a trip that takes 20 minutes on foot at most, imagine
what impact $50 million could have made on reducing vehicular trips
to and from the convention center. What if the tourism authority
had made that level of investment in the city’s bus system to not
only help visitors get around, but also to improve the commutes for
the 383,000 people who come to work there every day?

But that’s not who Musk’s “public transit” system is
for. And we have to stop pretending that it was—or that it ever
will be.

A new documentary shows how opinions on public housing are changing

Possible Lead Hazards in Hundreds of Thousands of Memphis Homes